It was Tuesday night and there was beer to be sampled so Our Beer Man and I, after a little wander around a few Leith hotspots, picked up a takeaway and headed to my abode to mix hefeweizen with grapefruit juice in ways that would blow your mind. 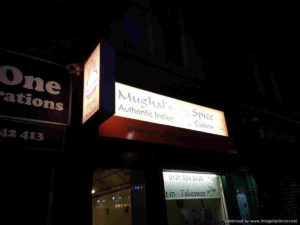 Our takeaway destination of choice was Mughal’s Spice on Albert Place. Previously trading as Eastern Masala, I’d reviewed it back when it was called Haq’s. It had been a low-cost favourite.

Prices remain keen under the new management and the menu typically broad. We kept things classic by ordering veggie pakora and prawn puri to start then chicken tikka bhuna and lamb saag to follow. Rice and naan were the accompaniments. 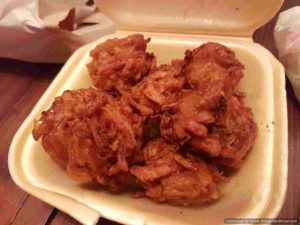 They offer 10% discount if you’re collecting meaning that the total bill was a very reasonable £23.50.

With the excellent Polartrosshofer as an accompaniment, we tucked in to the various items. 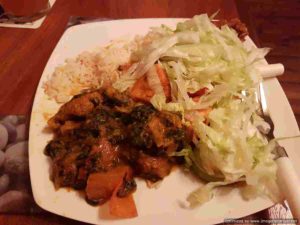 The verdict was that everything was decent, but nothing was much beyond that. The puri was a bit dense, the pakora slightly flat but the meat in the main courses brought things round to a slightly better finish. It did the job with minimal fuss.

So overall, Mughal’s Spice looks like a good enough takeaway option. It has a bit to do to match the quality of nearby Shapla, though, so it wouldn’t be top of my recommended list for this neck of the woods. It nicely fuelled a very enjoyable midweek evening, though.