We are nothing if not diverse.

Today, the golden arches beckoned us towards their speedy sustenance store. For balance, we will be attending to that other great paragon of swift burgerdom, the Burger King, soon, as well as sampling another, slightly more locally sourced equivalent, perhaps from Snax or other similar joint (recommendations welcomed).

But, on with today’s business. What more is there to say about McDonald’s than that which has already been said a hundred times over? Love them or loathe them, they are a feature of high streets up and down the land. They are the home of the “Happy Meal” and the “Big Mac”.

I am not a connoisseur of the McDonald’s products. My drinking habits usually placed me within the catchment area of the Burger King emporia, so I must admit to never having sampled a Big Mac. There’s a first time for everything, and for me today was my Big Mac deflowering.

I was accompanied for this humbling ceremony by Gary, who has been on sabbatical from lunch questing, since joining for our wondrous meal in Mithas, a few months ago.

We chose the McDonald’s outlet in Waverley Market (I still can’t quite come to terms with calling it Princes Mall), which is one of their smaller branches. The queues for the service counter were agreeable light, so I was quickly attended by a spirited young girl asking me challenging questions from a colourful palette on interrogatives. “Is that a large?” “”What drink with that?” “Regular or diet?” “Sit-in or takeaway?”

I expertly slalomed my way through this complex matrix of decisions, being rewarded with a large Big Mac, fries, and popular cola drink, for the princely sum of £4-odd. 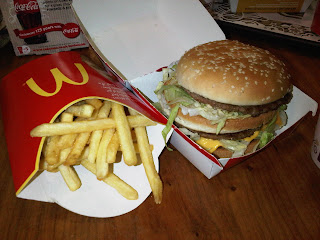 Gary chose a large Quarterpounder with Cheese, fries and popular cola drink, for around the same price.

The tables and chairs were basic, but clean and functional. We unpacked our food and beheld it in all its majesty. My Big Large Mac looked rather like the display pictures, which was heartening. Shards of lettuce poked out at jaunty angles. Taste wise, the dominant flavour came from the gherkins. The meat offered a transverse medium for the pickled piquancy, rather than providing a strong savoury meatiness to contend with it. The bun offered padding. The cheese offered little.

Gary fared a little better, by simple virtue of his burger being augmented by a few more condiments, to tickle his palette. Ketchup and mustard had a little play with the gherkins, creating something at least touch more interesting. 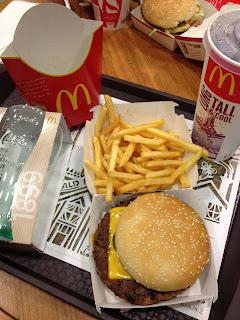 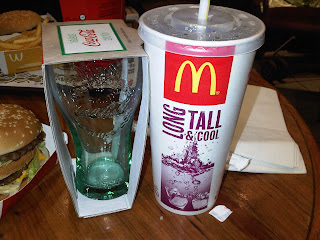 Overall, Gary’s verdict was, “it was exactly as expected.” I have to say, that’s pretty close to what I thought as well. Big chains like McDonald’s have a bad name, but I can think of countless restaurants that people hammer for lack of consistent delivery. We had a pretty good go at that type of thing with our review of Whigham’s. With McDonald’s, you get a consistent product. That can be extremely comforting. You don’t get oodles of imagination, style, elegance or panache, but in case you were wondering if they’re still serving the same stuff you used to eat, last time you visited, I can confirm that they are.