Welcome to the first ‘en route, en croute’ featuring the Lothian Buses 41. Just to ensure this isn’t a one-off, I’ll be posting a review of another bus route, the 1, this time next week.

Now exactly what constitutes ‘on the route’ has proved a contentious topic. For now I’ve just gone with places I could see from the bus based on a journey along the route a couple of days ago.

I didn’t join the bus at its Cramond terminus, but I don’t think there’s much to report in terms of food until the bus turns off Queensferry Road and heads into Davidson’s Mains.

In that little village I found an Indian called Miraj next door to a Gregg’s. I popped in for a quick coffee at the Village Coffee Shop, then noticed a smart looking chipshop called Corbie with a Chinese place called Delicious just over the way. The Turtledove Play Cafe caters to the parent and baby crowd.

As you head towards town, we next find a delivery branch of La Favorita just along from The Raj. I wasn’t a fan of the Raj in its Leith days, but I hear more favourable reports of this new location. We then come to Café Citron which always struck me as reliable enough. The bus spins past the Craigleith shopping centre, which has a KFC lurking, before a long stretch which is dominated by views of Fettes College and not much in the way of food and drink options.

It’s then the West End before you hit a motherload of places along Queensferry Street. Flavour is decent, as is the West Room. La Campagnola is a good chippy. Cairngorm offers excellent coffee, then you have the majesty of L’Escargot Blanc and its Bar a Vin at ground level. Le Di Vin and La P’tite Folie offer further French options.

Forage & Chatter is splended, Quattrozero is a good Italian, Milk Juicery offers health lunches, and Home by Maison Bleue is a sound option. Soderberg is always worth a stop. Then there’s the solid Italian chains Zizzi and ASK Italian. Galvin’s Brasserie and Pompadour at the Caledonian are lovely places.

On Princes Street, there’s mainly a mix of chains and department store cafes, but Restaurant 100 is good and you can spy Castello on Castle Street as you whizz along. Cafe W in Waterstone’s is pretty good.

The bus then turns up Frederick Street which means you get a look at quite a concentration of places. These include the Boozy Cow, Bourbon, Fredrick’s, Cafe Andaluz, Cairngorm, Jamie’s, Lowdown, Wellington, Bar Napoli, Yes Sushi, The Dogs, the Pakora Bar, Hoot the Reedemer, Yeni Meze, the Printing Press, Henderson’s, the Hanover Tap, Chez Jules, Oink, Milne’s and Bibi’s. Whew!

The turn up the Mound brings the Whiski Rooms into view, along with the Cafe on the Mound, the Italian on the Mound, the Makar’s Rest, Zebra and Stocks. You can just about catch a glimpse of Angels with Bagpipes on the Royal Mile.

Then you have a pleasing run of places with Cucina at the G&V, Ondine, Scott’s, the Cellar Door, Vittoria, Uncle’s, Yum Yum and the Outsider on George IV Bridge.

Union of Genius and Thomas J Walls on Forrest Road are excellent, as is Civerino’s Slice. El Falafel and Checkpoint on Bristo Place are grand. Paradise Palms offers vegan excellence, while Wildman (when it reopens), Kweilin, Beirut, and Kebab Mahal are good Potterow options. Buffalo and Sylvester’s are also just there.

The outstanding Field and the gloriously beery Usher’s are on West Nicolson Street. Red Box and Petit Bleu are other options on this street.

Then you have some strong Korean and Chinese options with Kim’s and Tasty Noodle the best. The Southside Social is a very good pub, Cult Espresso serves exceptionally good coffee, then you can just about spot Summerhall, Miller’s and Indaba Deli before you turn along the Meadows. 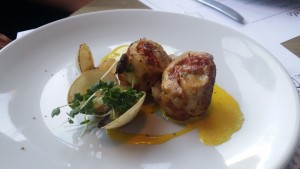 Ballotine from the Rabbit Hole

Victor Hugo, Deadly Donuts and the Beetroot Café police box are worth a look. Then there’s Saiko Kitchen, the excellent Rabbit Hole, Eddie’s Fish Market, Brochan and new cheesemonger Wedge, before Café Artista and Jenni Douglas’ shop represent the last places that I’ve tried along the route. I’m always intrigued by the fabulously named Wok Ness on Strathearn Road and I did try Birchwood in its previous incarnation as Wild Wood.

There’s then a fairly residential conclusion to the route with King’s Buildings marking the terminus.

And that’s what you can sample along the 41 route. I’ve mentioned most but not all, I’m sure, and there are a bunch of other places within just a few minutes walk, so it’s a route that’s packed with a great range of food and drink stuff to try. Have fun when you give it a go!