The Skylark on Portobello High Street has developed a good reputation as a fine local cafe bistro. It has also been a really active supporter of local street food vendors with a series of kitchen takeovers by the likes of Alplings and Fresh Revolution.

The latest business to feature was newcomer Smokin’ Bros. Friends Lewis and Jordan took over the kitchen at the nearby Dalriada for weekends in August, with their home-smoked meats proving a big hit.

For their Skylark evening, they offered four core dishes: ribs, smoked pork, brisket and veggie chilli. Along with regular guest questers Hayley and Jessica, we arrived during the middle part of the evening to find the ribs already sold out, which was sad but a good sign. 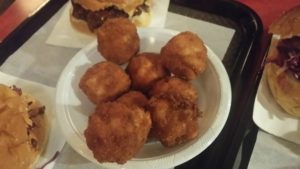 Accordingly, we ordered the other three dishes plus an extra brisket roll just in case. These were accompanied by mac n cheese bonbonbonbons and potato straws.

We started with the sides and they were a real highlight. The mac n cheese bites were particularly good and the little crisp potato scraps were saltily moreish.

The veggie chilli could have used a little more pep, but the smoked meats were both very impressive. The girls preferred the beef, which is certainly the harder dish to get right so was really pleasing to see it done so well, but I thought the fattier pork handled the smoke slightly better. Both made for very good eating, though.

We rounded things out with a slice of bacon maple cheesecake. The bacon was in the base crumb, so quite subtle. It was good without completely knocking it out of the park.

So overall, I was really pleased to see Smokin’ Bros producing such good quality barbecue this early on their culinary journey. They will be an interesting business to follow as they plot next steps, perhaps towards a food truck or more kitchen takeovers. Keep an eye on their social media for future appearances.