The original Espresso 100, published in July 2013, was compiled solely from my espresso samplings over the course of the months previous to publication. 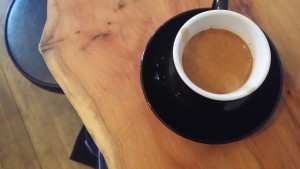 It caused a bit of a stir, which was good, and while I’ve been threatening to update it at various points, I’ve relied more upon Espresso Quest to keep people informed on all the best places to try.

But my thoughts turned to big list making again, a couple of months ago. This time I thought I’d enlist the help of others, for at least two reasons: firstly so the results were not “all my fault”; and secondly to broaden things out to cover drinks beyond espresso.

So I assembled a crack team of coffee enthusiasts, detailed below, and asked them to come up with suggestions for their best and worst places in the city. I came up with a way to calculate things once results had been submitted, then hit a big button which generated the Edinburgh Coffee 100.

As I did last time, I’ll publish the results ten at a time until we culminate with final ten to reveal number 1. Each day we’ll also share one of the worst places we’ve sampled, just so it doesn’t turn into an absolute coffee love-in.

Thank you to the team for their efforts. We hope you enjoy the list; we’re confident you’ll disagree with it. 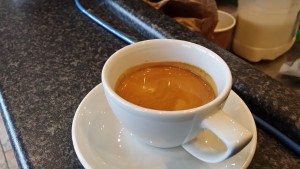 The Edinburgh Coffee Lovers, Pru and Pip, are the most devoted champions of coffee in the Edinburgh food writing community. Their site and app is the definitive source for Edinburgh coffee information.

Mark is the manager of Edinburgh’s best cocktail bar. He is a devotee of the piccolo, macchiato, and other coffees with tiny amounts of milk in them. His contribution to this list was mainly the phrase “65 – malty”.

Simon is a regular coffee commentator on Twitter and has been a great supporter of Lunchquest down the years.

Caz is a longtime friend of Lunchquest and looks after social media for Yelp in Edinburgh. She’s a food and travel blogger.

Chris is the owner of a fine drinking establishment in Stockbridge, serving some of the best burgers, ribs and wings in the city. He also has a mighty fine beard.

Dan is Lunchquest’s resident “chap I take to all the worst places”, including Hot Flame and Chopstix. We met through our mutual love of Union of Genius soup.

ABS is a cornerstone of just about every food and cultural event I run and/or attend. He’s a flat white drinker.

Coffee at Off the Walk