Considering I’ve lived in Scotland for more than thirty years, I’ve visited very few places across the land, instead mainly sticking to well-trodden routes in Edinburgh and a few other towns and cities. So, when the opportunity arose to have lunch in Clydebank I jumped at the chance as I’d never visited that part of the world, rich as it is in shipbuilding and sewing machine heritage.

I’d had a meeting earlier in the day at the Beardmore Hotel, but our chosen lunch venue, Sixty Ate Bar, was at the heart of Clydebank proper.

I was joined on this escapade by first time questers Evelyn, Jo and Sue, along with regular guests Graham and Tim.

Sixty Ate (located at number 68 Dumbarton Road) is nowt to look at from the outside, but is quite smartly appointed inside, with a number of comfy, circular booths. 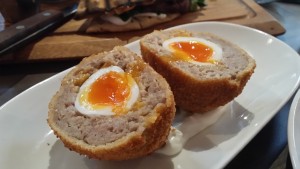 Their lunchtime menu offered very reasonably priced, hearty sounding fare, all around the fiver mark, to which you could add a starter or dessert for additional £3.

Evelyn, Jo and Sue were all hooked by the fish n chips, Tim and I opted for the Lincolnshire sausage hotpot, while Graham opted for the steak flatbread. I added a scotch egg to start and Graham had a bowl of spicy tomato soup.

After a moment or two, dishes arrived looking pretty respectable. Graham commented that his soup was indeed very spicy. My scotch egg was substantial with a good runny yolk and crisp casing.

The main courses were all well received, with a nicely judged lunchtime portion of fish n chips, and warming fare from the rest. The hotpot was rather more tomatoey than anticipated, and I’m not sure that local, Scottish porky blighters might not have been rather more appropriate, but it was a pleasing dish nevertheless. 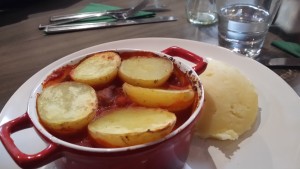 So overall, Sixty Ate Bar did a good line in hearty pub grub which suited our needs very well. I’d be more than happy to visit again if my travels being me to this part of the world. once more.