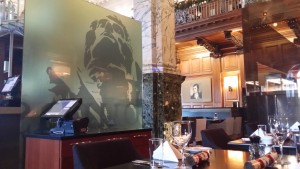 Two years ago to the very day, 23 December, we visited the Scotsman Hotel’s North Bridge Brasserie. The fare we were served was very mediocre. I wrote a feedback letter to that effect. One month later I wrote a further letter to complain about the lack of response to that feedback. I’m always happy to give a place a second chance, though.

Once again, I was joined by regular guest quester Kim, on a wild and blustery day. The smart dining room, formerly the hub of the famous newspaper, is a signature Edinburgh setting and very nicely appointed.

Starters promptly arrived. Kim’s soup bowl had blue murder cheese and walnuts at its base onto which the waiter poured the smooth veloute. My ballotine was neatly presented but rather bland in contrast to the sharply bitter citrus vinaigrette which completely overpowered the dish. It was a very unbalanced opener.

My main course was similarly lacking in harmony with the thyme gnocchi completely dominant to the exclusion of everything else of the plate. I’d had the turkey dish (or one very similar to it) the previous here and it had not pleased me much. 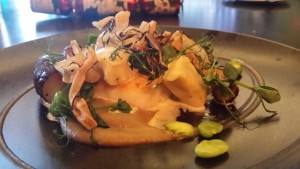 So overall, it was very disappointing to see the North Bridge Brasserie continuing to make all the same mistakes I’d fed back on two years ago. Dishes looked neat and tidy but reflected a serious lack of balance and an over-fondness for unrestrained bitterness. I have filed it under “not for me” and will not be visiting again. 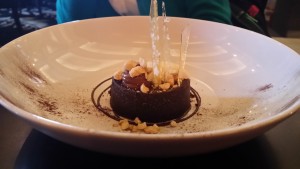