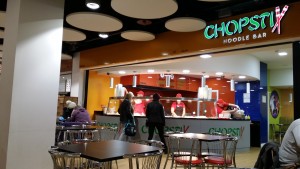 My trips with Lunchquest have definitely been a mixed bag. From the highs of the Feast of the First Frost to the lows of the now “sadly” defunct Hot Flame World Buffet. I was not sure a venue in Princes Mall was ever going to end up on my list of 2015 highlights but as always I admire Lunchquest’s dedication to the cause so was happy to give Chopstix a whirl.

Chopstix is one of a range of eateries in the Princes Mall “food court” – all bright neon lights and lack of character aimed at topping up the energy levels of the folk trudging around the bargain shops looking for something they don’t need. Mind you the pizza hole in the wall place there, Pizza Mafia, is meant to be pretty good so I was hoping Chopstix was at this end of the spectrum.

It’s a pretty basic counter set up with large glass containers housing ready cooked chicken dishes, each labelled with the name of the sauce. For £5.50 you get a large cardboard box of fried rice or noodles covered in a three chicken dishes. The chicken choices were all variations on a theme i.e. all pre cooked chicken mixed in a glazed gloop. 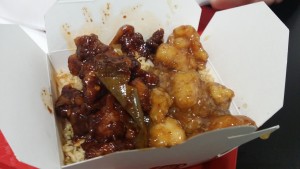 I went for BBQ chicken and caramel chicken chicken. I have to admit they were difficult to differentiate from one another, all heavy on the MSG and sugar content and rather akin to eating chicken smothered in spiced honey. But the portion size was decent and they were edible enough. We had also taken a portion of chips and large spring roll for £1 each and, whilst the chips were fairly good, the spring roll was a depressingly soggy item.

Overall I’d say Chopstix provides a large amount of food for a relatively small amount of money but it’s not going to be on my return list for 2016. Particularly when you can get fresh take away for about the same cost at Barnacles & Bones less than 5 minutes walk away from Princes Mall and the quality of food there is outstanding.

I am mean to Dan. When I pass a place that conjures memories of Hot Flame, I think “I must bring Dan here.” He has been cast in the role of “this looks so bad; could it be so bad it’s good?” correspondent. We’re inevitably going to end up at Cosmo, one day, but for now we contented ourselves with a trip to Chopstix in Princes Mall. 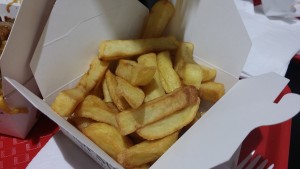 Dan had never been in the execrable premises before so was quite overwhelmed. I explained that Pizza Mafia, 20 feet away, was good, while Stop…, 30 feet away was awful. So it goes.

Chopstix is a chain in various locations around the country. I’d not visited one previously but I’d wandered past their Glasgow branch many times.

Their set-up is pretty simple: you choose either rice or noodles, add either two or three chicken toppings, depending whether you want to be medium or large, then choose from some other assorted side whatnots. 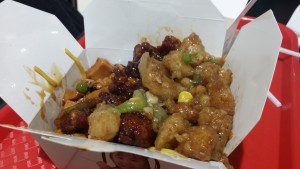 Dan immediately said rice, so that saved me a decision. He topped his rice with Korean BBQ chicken, salt and pepper chicken and caramel Thai chicken. I too went for the Korean and salt & pepper stuff atop my noodles, with additional black bean chicken. We added their £1 chips and their £1 spring roll.

Served in noodle boxes, presentation was lateral and barely considered, but it didn’t look so bad.

The spring roll was awful; unseasoned, chewy and a basic disaster. But this was the only really sour note. The chips were pretty decent and certainly a good portion for the money.

While not tearing up any trees, the noodle/rice boxes offered chicken dishes that I thought tasted distinctly different from each other, and decent rice/noodle accompaniments.

So overall, Chopstix was far from the worst place I’ve exposed Dan to. The location is horrifying but they’re actually building a reasonably diverse food court selection at Princes Mall. I won’t be rushing back but would be happy enough to pop in again if hunger strikes before or after a Waverley train journey.