Field, on West Nicolson Street, is one of my favourite restaurants in the city. I confidently and recommend it to people and it regularly hits the mark. I was really pleased to hear that they’d secured a second site across town in Stockbridge and interested to see what direction the new place would take.

I was slightly surprised with the idea of Field Grill House, a steakhouse taking over where the Buffalo Grill used to trade on Raeburn Place. While a constellation of carnivorous creations is always to be welcomed, particularly given we have only one or two really good steak places in the city, it seemed like a potentially constraining route for them to go down. I needn’t have worried, though, as their signature verve and charm was apparent from the moment we crossed the threshold. 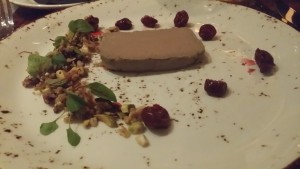 I was joined this evening by Frances, who most recently joined at Martin Wishart. Frances quite likes wine so we were particularly appreciative of the excellent list Field Grill House has put together. The bottle of Teroldego we had was quite spectacular.

The menu is similarly beautiful, both in its physical construction and the balance it offers beyond the core grill offering. The smart sounding game, seafood and veggie options would need to wait for another day, though, as it seemed silly not give the grill a shot on our first visit. 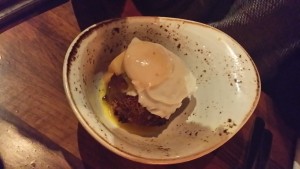 Frances started with the ham hough and asked the kitchen for ideas to replace the bearnaise accompaniment as she’s not a fan. Given that the dish came with soft poached egg on top of it, the decision was to simply let the yolk do the sauce work which seemed entirely sensible. She followed with the 40 day aged sirloin. I started with the chicken liver parfait and followed with ribeye and chips, with some peppercorn sauce on the side.

The starters promptly arrived with mine looking particularly stylish. Frances’ was flavour packed and the egg yolk was a very able sauce substitute. It could probably have been just a little smaller for a starter portion as it was pretty hearty stuff. My parfait was very good indeed, with the accompanying pistachio granola offering excellent textural contrast to the richly smooth parfait.

Main course steaks were very well executed and the quality of the meat, from Shaw’s, really pleasing. The chips were just as they should have been, too, so it was a double thumbs up.

We rounded things out with the remnants of the superb wine and a couple of decent espressos, then toddled along the road entirely sated.

So overall, Field Grill House is looking really promising. The atmosphere is livelier than their smaller, more quirkily understated first restaurant, with the larger space affording them more room to manoeuvre than the Nicolson Street premises, but the level of excellence remains very similar. These guys know how to run great restaurants and for a place in its first few weeks of trading things feel beautifully settled and marvellously familiar. You can expect to see me here on regular occasions throughout the coming months and years.