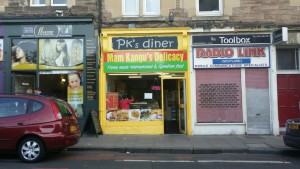 I’m often indebted to social media for advice about new places, with the latest example being Mam Kangu’s Delicacy, which although relatively close to where I live had not been on my radar until a friendly tweet pointed it out. At the end of a long week, I tootled there for an early evening visit.

Previously a sandwich shop, it’s charms are very much of the down-at-heel variety. They have window counter seats, then three tables and a further counter at the back. I took up station at the latter. 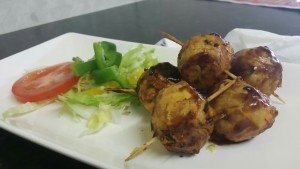 The menu is largely focussed on the cuisine of Gambia. Seafood and hearty stews are to the fore, so I ordered to that pattern. I opened with lobster ball skewers then followed with an on-the-bone beef stew.

Promptly delivered by the marvellously warm and welcoming counter staff cooks, the lobster balls looked really rather lovely. Fiery chilli sauce was brought as an extra accompaniment. It was fiercely good. 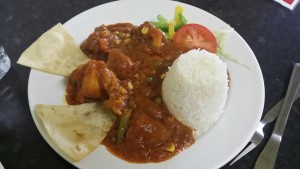 The balls themselves packed great flavour, with flecks of chilli bringing well-judged warmth. It was a really pleasing opener

The main course didn’t look quite so bonnie but packed similarly punchy flavour. The meat had a lot of flavour and the simple rice accompaniment nicely balanced the warmly spiced sauce. It was great stuff.

So overall, I was well impressed with Mam Kangu’s. You will see from the bill details, below, that it’s an absolute snip. The quality is really good, too, making it a very attractive value proposition. What’s more you can order items for home delivery from Deliveroo. Whatever route you choose to sample it by, you will be impressed. I look forward to further exploring their menu over the coming weeks and months.

A Room in the West End