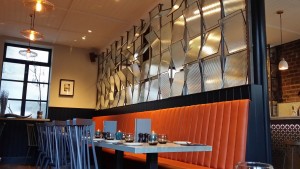 I had heard a lot of positive reports on the Leith Chop House in its first few weeks. However, I’m not a fan of a couple of the other places they own, Monteith’s and Sygn, so I thought it would be best to give them a good while to settle in before visiting.

In addition, I thought it would be worthwhile to assemble a crack team to put it through its paces, so was delighted to have regular guest quester Freya along, as well as long-time readers, first-time questers Kath and Jo. 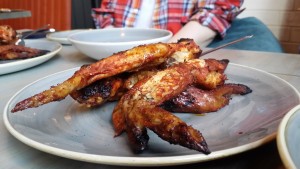 Showcasing meat from Shaw’s, the Chop House has an onsite butchery and is dry-ageing their steaks for up to 80 days. The place has had a very smart refit since the days of Leith Lynx and feels really very stylish.

We visited at lunchtime, which isn’t perhaps the smartest play for assessing steak restaurants, but their lunch menu looked worthy of attention and their full a la carte was also available. 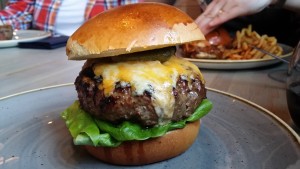 Service was attentive and helpful throughout, but a long preamble talking us through the perfectly straightforward menu was heavy going and entirely superfluous.

We opened with some smoked chicken wings to share. Kath and I chose from the lunch menu for our mains, opting for a short rib sandwich and burger, respectively. Jo chose the fillet steak, while Freya opted for ribeye, from the a la carte. They both added the chimichurri sauce. We shared sides of dripping chips, mac n cheese and cabbage & bacon. 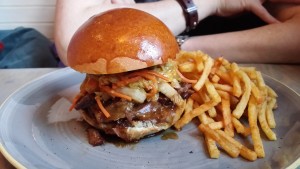 The wings were very good, but the smoking was very light so the description didn’t quite match expectations. The blue cheese sauce was excellent so we saved the remainder to dunk main course items in.

My burger was a monstrous item. It was way beyond the limits of the shove faceward method so I had to apply the knife and fork to it. It had a loose and juicy texture that put me in mind of the burger at Twenty Princes Street, which was good news, but it didn’t pack quite the expected beefy notes. 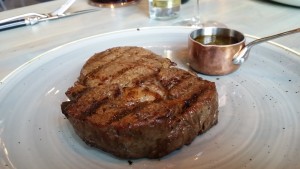 Kath was well pleased with her sandwich which featured good kimchi slaw. Freya’s steak was cooked a good bit beyond her specification, but it was a high quality piece of meat so she was happy with it. Strangely, I found Jo’s fillet offered much better flavour than the ribeye, which was unusual but impressive.

Of the sides, the chips were very good, but the mac and cabbage dishes pretty weak. 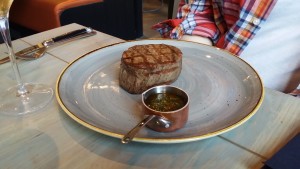 Sadly, I had to work in the afternoon so didn’t get to join the others in examining what looked to be an impressive drinks list, so I’ll need to come back to give that a go.

So overall, there was lots to like at the Leith Chop House. There were strengths – the quality of the steaks, the sauces – but some slight weaknesses in execution and room for improvement on the sides. It’s not quite up there with the likes of Blackwood’s at the top of the Edinburgh steak tree, but is comfortably better than Kyloe or Steak, so if that’s your meaty paradigm this place will impress you a great deal. I look forward to visiting for dinner to give their a la carte a proper go.

Total bill: I left way before the bill was settled, but I’m guessing the items listed above cost somewhere around £180