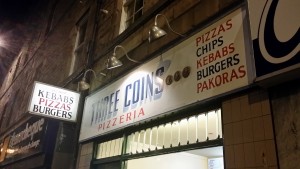 Following on from our list of disappointing experiences, for the sake of balance I felt the need to celebrate the places that turned our expectations on their head. The seven that most readily sprung to mind were:

1. Three Coins
Three Coins looks like a rather ordinary little Tollcross takeaway, which is half true, but their pizzas are so damn good that any negative preconceptions are soon cast to the four winds.

Their pizzas are thin and crisp so cooked in a matter of a minute or two, meaning you’re on your way in no time at all. Each bite of the resulting pizza feels light and almost virtuous. 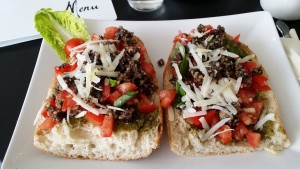 2. Reekie’s Smokehouse
When I first visited Reekie’s Smokehouse, there was lots to like, but I was so confident that it would make Alabama BBQ aficionado MJ sad that I barely mentioned it in her presence. I liked it, but it would surely never meet her standards and expectations.

Then I visited again. And again. Then I started taking people. Then I took more people and they loved it. And so did I. It’s now ready for MJ to visit. And in my heart of hearts, however much I was surprised by how good the place was, I never thought we’d get to that point.

3. Cafe Colpamia
The west of the city is generally a bit of a wasteland, coffee-wise, so when I noticed new occupants, Colpamia, in a spot that had been ploughing the burnt and bitter coffee furrow, my expectations were set low.

When I wandered in and sampled their espresso, I was genuinely flummoxed. What was this tasty continental roast? Then I saw the immortal words – “we work with local roaster Mr Eion”.

It was great to see that a roaster whose instinct is towards newer approaches had the willingness to collaboratively work with a cafe to produce something that so accurately reflected the flavour palette of their native Sicilian cuisine.

4. Tasty Noodle
Tasty Noodle is a little whole-in-the-wall noodle bar on Buccleuch Street. It doesn’t look like much, but boy did it impress me with its simple but flavour-packed noodle soup dishes.

Prices are extremely reasonable and portions are very ample indeed, which is always a good combination.

Make sure to visit for a surprisingly great meal.

5. Polentoni
Easter Road Italian cucina Polentoni was a real unexpected gem when first we visited and has maintained that standard across many subsequent trips.

With their northern Italian dishes, unsurprisingly showcasing the polenta of their name, they offer excellent, well-priced high quality dishes. They have really decent Italian coffee, too.

It now looks to have built a much-deserved highly appreciative audience, as it tends to be very busy whenever we pass.

It turned out to be both this and the purveyor of hands-down the best bacon rolls in the city. When you’re feeling particularly indulgent, their double pancetta roll is the peak of their offerings.

They do outside catering, also, so are a great choice if you’re looking for an outstanding feed for a breakfast meeting.

7. Mr Nick’s
Restaurants and eateries in shopping centres are not generally anything to write home about, but Mr Nick’s in Ocean Terminal is an exception.

Good, cheap, tasty Greek fare has taken a while to emerge in Edinburgh, but finally good quality gyros, souvlaki and the rest seems to have arrived.

With a really good little beer selection and some nicely made classic starter dishes, this was a really pleasant surprise when we visited.