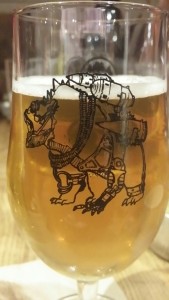 I generally try to keep my Saturdays fairly quiet beyond perhaps a lunchtime trip to one of the Saturday markets, but I recently went on a bit of Saturday adventure with an action-packed, multi-stop grubcrawl extravaganza.

I was joined by a large cast of revellers, most notably Our Beer Woman, her mother and her partner (Elly and Mark), and an extensive collection of friends (Jack, Donna, Sarah, Raymond, Ciara and Maurizio).

We started proceedings at The Hanging Bat, where they were hosting the latest incarnation of the Rainbow Project, a transatlantic doodah involving collaborative brews linked to the seven colours of the rainbow. This one focussed on sours, which made for a slightly odd drinking experience. There were some great beers in the mix with the Siren/Surly blue particularly good, but seven consecutive sour things was rather testing. 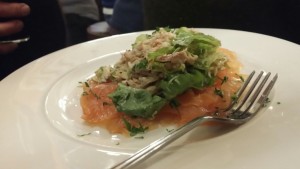 The Beer Woman had one of the themed hotdogs which were special in their rainbow toppings for the occasion. The blue cheese one looked glorious sloppy and apparently made for decently good eating. The red one, topped with chorizo, was declared very satisfactory, too.

We toddled along the road following this with a quick stop at the Bow Bar to watch the staggering events in the Japan v South Africa rugby match. On the way, we called in to wave to MJ who assisted with some running footwear repairs for Ciara. The Bow was on typically fine form with the crowd abuzz as the extraordinary game drew to a conclusion. 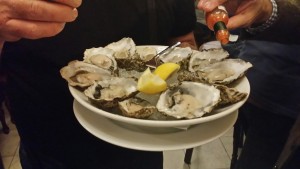 Our next stop was at the Cafe Royal where the order of the day was seafood. We partook of a mountain of oysters, a mound of mussels and a biggish pile of smoked salmon and crab.

The oysters were as good as I’ve been served on the premises, where I have been known to munch through many dozen of the little blighters of an evening. Everyone was highly pleased with them. 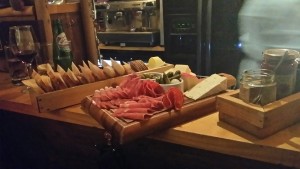 Having had to put up with Guinness as our accompanying dark beer with the oysters, we popped next door to the excellent Guildford Arms where a much better beer selection awaited us. Things like Orkney Dark Island and Tempest’s Bad Day at the Office did very nicely.

We then wandered down the hill to Pickles on Broughton Street. This marvellous little hideaway is a great purveyor of meats and cheeses along with great pickled things and wines. We shared one of their meat and cheese platters with Mellis’ cheese to the fore. There were very good accompanying onion and tomato chutneys which made for very good eating. We shared some pickled eggs, too. Glorious!

The company then dispersed and while I did, as I often do, look in at Lucky Liquor Co on my journey home, no further food was consumed after our rather splendid grubcrawl.

So overall, we crammed in an excellent array of venues and experiences on our day of fun. The Hanging Bat is always great, the Bow was as marvellous as ever, the seafood at the Cafe Royal was spot on, the beer at the Guildford was lovely, and the nibbles and wine at Pickles were a joyful cherry on the top. These are all venues that I’d commend to you.