When I heard that Pierre Levicky had sold Pierre Victoire my first thought was for the continued wellbeing of sister restaurant Chez Jules which has been an enduring favourite. It remains in M. Levicky’s hands, though, so that came as a relief. I was intrigued to see what, if any, changes had been made in the short period since it changed ownership (I believe the new folks were the original hands at the tiller of The Atelier) so popped down to Eyre Place for a visit. Sunce that time, it has changed names to the New Chapter.

In essence, the answer is very little with the name and ethos still maintained and a sense of “evolution not revolution” around the place. M. Levicky’s distinctive artwork is still seen on the walls, for example.

I was joined by regular guest quester Freya, who had recently been along at Blackfriars.

The lunchtime menu offered two courses for £9.50 and three for £12.50. The a la carte was also available, but the lunch selection worked for us. Freya chose a tomato salad to start then followed with risotto, while I chose chicken liver parfait, then was eventually steered towards the chicken bonbons in marginal preference to the mussels.

Starters were soon with us delivered by the friendly and efficient waitress. Freya’s dish looked plenty bonnie enough and was given a firm thumbs up. My parfait was profuse and served with a neat baton of toast. I used the plentiful and very good accompanying bread to deal with the considerable amount of both parfait and chutney. It was a hearty and delicious opener.

My main course was a slightly unusual combination of crumbed balls of shredded chicken served with on the cob corn. It was flavour packed and nicely filling but I’d struggle to locate it as classic French cookery. Freya’s risotto was equally satisfying and much more conventional in its rendition.

I was a little hungover so was talked in to dessert, which is a rarity, but I’m glad I was as the simple dish of strawberries and accompanying bits and bobs brought both good flavour and excellent textural variety. Not that this means much coming from a complete dessert eschewer like me, but it was one of the better sweet dishes I’ve had in a good while. Freya, who is a big fan of lemon desserts, very much enjoyed her twist on a lemon meringue pie, so that’s a much stronger endorsement. 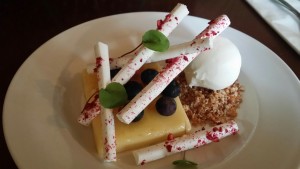 So overall, I really enjoyed our visit to what is now the New Chapter. I’d slightly written it off in my mind as a very good but not staggeringly compelling place. With the fresh impetus of new ownership it looks well on the way to building a much fonder place in my heart. I’d strongly recommend visiting.