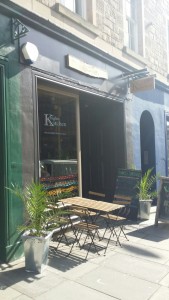 It’s always exciting to see a valued street food trader give the world of more permanent premises a try. It has worked to very good advantage with Ninja Buns’ transition to running the Paradise Palms, but I was recently sad to hear about the end of Meat Hook’s tenure at Mather’s so it doesn’t always work out.

Knight’s Kitchen has built an appreciative audience over the past few years, with regular appearances at Grassmarket market, amongst many other locations. Their permanent venue on Nicolson Street opened just in time to take advantage of the Festival bounty, but I didn’t make it in for a visit during that hectic month. I soon rectified that, though.

Upon arrival, it was hard not to be charmed by the interior, which brings together roughly hewn wood for a hut-shack feel. There’s a smart African mural, too. I liked it very much. 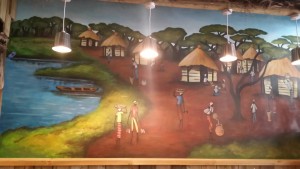 Their menu is extensive, drawing inspiration from a range of east African cuisines. There are daily specials, a lunchtime selection, small and substantial sharer platters, and breakfast/brunch dishes.

I opted for the soup of the day which was lentil, coconut and chilli, then followed with an intriguing sounding sandwich called the Herdsman. 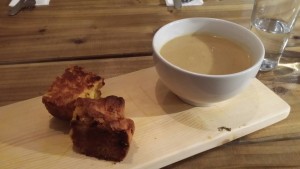 The main course was an absolute beast. It essentially brought together two different toasted open sandwiches – one with avocado and bacon, the other with boerewors (South African sausage) and steak. I suppose the two sides could have been eaten all together, but I think that would have required the installation of a flip-top head. 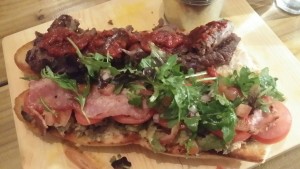 Rather than attempt this jaw redesign, I attacked it with knife and fork. It proved monstrously good eating and one of the most entertainingly massive feeds in the city. The accompanying sweet potato fries were every bit as chunkily satisfying.

So overall, I really enjoyed my visit to Knight’s Kitchen. I had two dishes that hit the mark very nicely. Portions are extremely hearty, almost to the point of being overwhelming, and the quality is really quite pleasing making it a place that’s entirely worthy of your attention. Make sure to visit soon.

Down the Hatch at Food n Flea