On an unnaturally sunny afternoon in Edinburgh, I met a friend for a little Mexican-fusion munching, after having heard good things about Bodega and having ordered takeaway from there once before.

This is a look-carefully-or-you’ll-miss-it venue which seats about 15 patrons to capacity, so getting a table is (without a reservation) in the hands of the gods. The interior is pretty fun, with colourful posters covering some of the walls, but there’s certainly not much room for extras such as pushchairs. 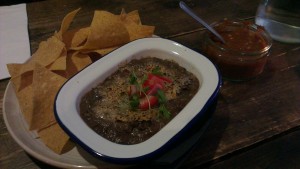 The gods smiled on us, granting us a table, though we were informed that our seats were only available for an hour. That was fine with us, and we were promptly asked for our order. We opted for a starter to share: black bean dip with cheese and nachos, plus their three specials for the day: a variety of filled tacos.

The bean dip was tasty enough, earthy with a hint of cheese, but did smell somewhat like a dirty sock. Unperturbed and famished, we ate it all. Then came three sets of tacos (two per plate). The first, Korean pork with Asian coleslaw, was moist and flavoursome, with a subtle peanut flavour in the background. However, it did drip with grease, but that didn’t affect the eating. Slow cooked lamb with tzatziki and feta followed (minus the feta for some reason), with tender meat and a refreshing zing to the yoghurt. Finally, mushrooms with lime-coriander pesto and crispy red onions, which had a great mix of textures but was a little dry. Unfortunately the taco element of each of these was also quite dry and a little flaky, which was disappointing.

We left, pleased with the flavours but a little hungry because the portions are small. In Bodega’s defence, they do recommend ordering 2 sets of tacos per person, so we fell short of that, but there was a risk of the bill mounting. In short: if you fancy a tasty bite, aren’t too hungry and don’t mind paying slightly over the odds, Bodega is worth a shot.

We wore: a look of festival exhaustion