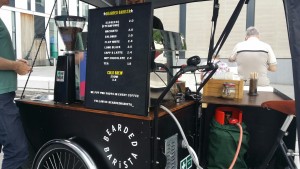 I’d visited the Bearded Barista many moons ago when he’d temporarily shown his wares at the Tram Stop market. It was good to hear, via the Edinburgh Coffee Lovers, that his coffee bike was back on the road with a more permanent pitch just near the university, on the corner of Chapel Street and Potterow.

A very busy spot to capture Festival revellers, I found things pleasingly crowded when I stopped by.

Showcasing Steampunk coffee, their selection covers all the classic coffee bases as well as offering something called a shlongo, a trap that I blithely fell into. 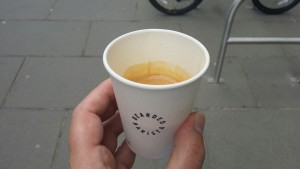 The shlongo is halfway between an espresso and a long black, so quite a good gateway drink to shorter coffee. The friendly and bearded (although I’m struggling to think of many barista chaps who don’t sport some sort of facial topiary, these days) owner was quickly about preparing things.

It proved a very good quality drink and did better than espresso would have at introducing just a notch more moisture into my Festivally dehydrated walking corpse. If you happen to need convincing of the virtues of espresso, this is a great and amusingly named stepping stone on your journey.

So overall, it was great to run into the Bearded Barista once more. Having been trading at this spot for around seven weeks, there’s every indication that this will becoming firmly established on the city’s coffee trail. Visit soon.

And that’s your lot for another fantastic August in Edinburgh, ending on a caffeine-fuelled high note that will endure into September and beyond. For Festival visitors, see you next year for the 2016 renewal; for Edinburgh friends, see you in a few days once I’ve recovered.