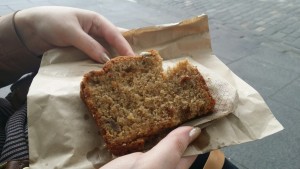 The pop-up escapades continued today with a visit to Stag 2 in their new temporary home at Dancebase. They’d previously spent a few months at the Warburton Gallery before C-Nova took over the space and Soul Sushi in turn popped up. It’s just a short way down Victoria Street and along the Grassmarket to their new location, so they’re still in the same neighbourhood, which is handy for me on my way to and from the office.

I was joined today by Claire, complete with sparkly gold nail polish, who had previously quested to the Jolly Botanist. 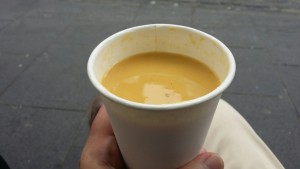 This incarnation of Stag is essentially a takeaway with just a couple of low stools to perch on for a while, near the coffee counter. Fortunately there’s ample seating in the Grassmarket and nearby area, so we grabbed soup and cake (£11.40 for two soups and two cakes. I grabbed a quick espresso (£2) too, of course) then made for a bench.
As we chatted about Bloody Scotland and the idea of doing a themed Hush Hour event to make a little contribution to the pre-event publicity, we sipped on yellow split pea and coconut soup. This was tasty stuff and came with a nicely fresh accompanying roll. 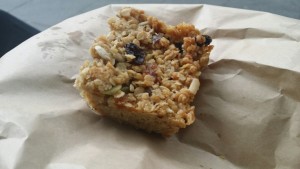 Claire opted for banana bread for her cakey treat while I chose a good flapjack. It was a lovely conclusion to a very enjoyable lunch.

So overall, Stag continues to do fine work and it’s great to see them quickly established in their new spot. Make sure to visit for great coffee and tasty soup delights, this Festival.