Our ability to flit in and out of restaurants and cafes unnoticed continues almost entirely undiminished across four years of reviewing around the city.

However, our faces are very familiar around some of the markets and food trucks meaning that when we visit a new trader, such as today’s lunch site, Flat Out, they’re often very familiar with what we’re up to. 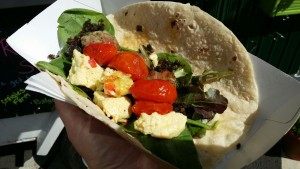 Having been trading for a couple of months, Flat Out’s general idea is a range of filled flatbreads. These are served from one of the smartest food trucks on the circuit. It would add charm and style to any occasion.

Currently, they’re appearing on Saturdays and Sundays throughout August at the George Street Festival food corner that’s being manned throughout the month by Fresh Revolution and Harajuku.

Today’s main item of interest was a breakfast flatbread (£5.40) which brought together bacon and sausage balls, haggis and black pudding crumb, frittata and roasted tomatoes.

I took a seat at one of the little array of tables and chairs that are there to promote lingering in the sunshine.

I’d started forking at the elements before I realised that I should at least be attempting to wrap things up and shove them faceward until collateral damage rendered another shirt a spotted wasteland.

By both these and various other methods I established that this was a very tasty item. The highlight was the sausage and bacon balls, which were soft and flavour-packed. The crumb brought good texture and the wrap case was well-crafted.

So overall, the Flat Out folks are doing very good work. They’re still in the early phase of their journey, but they’ve got the look of their van spot-on and their food is showing very good promise. Seek them out this Festival then beyond at venues such as Tram Stop and Morningside market.