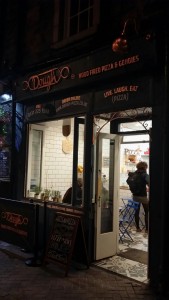 At the end of another long Festival day, I was in desperate need of a feed after favouring a mainly liquid based approach to the day’s diet. From the Book Festival, on Charlotte Square, I headed to a recently opened pizza place called Dough, on Rose Street.

Previously the site of Eatings, the owners of Dough were running that place for the past couple of years all the while plotting this pizza emporium’s arrival.

The centrepiece is a fairly massive wood-fired oven which makes fairly massive pizzas. These come by the slice or as full size dishes. I opted for one of the latter with their four cheese (fontina, mozzarella, parmesan and gorgonzola) variety (£9.95) my choice.

I took a seat at one of their informal tables, looking every bit as crumpled as the mismatched linen I was wearing. 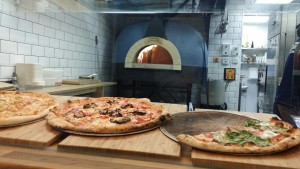 The spectacular heat of the oven cooked the pizza in no time at all. I ate some as I walked, but each slice was so massive and the base so soft and floppy that it was slightly tricky going. With a less sure hand I could potentially have dropped large swathes of cheese and tomato down my new navy blue shirt (RIP new shirt friend – you never stood a chance).

Once home, I tucked in with renewed gusto. The topping proved of excellent quality with the cheeses coming together for mountainous flavour. 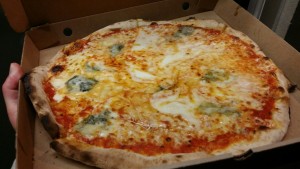 The base was just a little too soft, though. It was very tasty but just made things a little challenging. Still, the surety of my hand being what it was on this occasion, I should give it another go, perhaps to try options from their lunch menu.

So overall, Dough looks to be a really good new addition to our city’s pizza outlets. I’ll be back soon to give it a more thorough appraisal outside the bounds of Festival time, but for now it’s definitely worth a visit in the last few days of the August fun.