With the forecast suggesting high winds and heavy rain, our journey up the road to visit friends at Loch Earn was blessedly fair, but just as we arrived at our rendezvous point and lunch destination, Mhor 84, the heavens did finally open.

Part of the collection of Mhor businesses that spans a hotel, bakery, chippy, farm and this roadhouse on the A84, this was my first visit, but I’d heard nothing but good things. Our friends Mary, Susie and Tracey are regular visitors given it’s just a short drive along the loch from their abode in St Fillan’s. Our party was rounded out by regular guest quester Gary and our founder and general inspiration MJ.

With a warm and homely feel, the place was abuzz with a lively Saturday lunchtime crowd when we arrived. We were seated at a long bench table to where menus were promptly brought along with water.

The menu held plenty of delights and was augmented with specials which includes locally caught trout dishes.

Susie, Tracey and MJ opted for the smoked trout and pate, which they had with good sourdough bread. I tasted a little of the fish and it was very good.

Gary tucked into a high quality full breakfast, which pleased him no end. Mary opted for tasty seafood chowder.

I was lured in by the soup of the day, which was spiced cauliflower topped with toasted pumpkin seeds. It was really nicely made with a smooth texture, but the spicing was just a little aggressive which meant the flavour of the cauliflower was rather lost in the mix. It was a shame because it was otherwise very accomplished.

I couldn’t resist trying a second dish so chose the smoked haddock rarebit. This was absolutely first class and the pick of the dishes we tried. The toast was lovely and crisp and the topping was brimming with smoky, melty flavour. It was one of the best dishes of its type I’ve been served.

The only slight niggle we had with the place was that some of the service was rather unfocussed with some new members of staff struggling to get to grips with a busy room of punters. We didn’t let this get in the way of a highly enjoyable lunch, though.

So overall, I was mightily impressed with Mhor 84. It served us some really high quality dishes showcasing excellent local fare. It’s worthy of a journey to this very scenic part of the country to sample their lovely food. We’ll certainly be back.

It was only by luck that we landed at Mhor 84 on a drizzly Saturday afternoon. Our trusty Google map was trying to take us to the hotel, which was a bit further along the route.

The place looks a bit like a shack that I would see in the backwoods of Florida, which could also house surprisingly excellent and sometimes exotic food. The place was charming, outdoor seating, fun potted plants to buy. Inside the look was rustic California beach cabin. All light greys and sanded wood with a sense of sitting in someone’s home. It was really lovely. 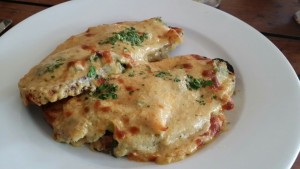 We met Susie, Tracey, and Mary who were already there picking at the olives and the delicious Mhor bread, from their bakery in the nearby village. It was really tasty and well-proved sourdough that had the right amount of crust and crumb. I should know, I got some with my main and then I nicked some of Blythe’s too.

Several of us ordered the smoked brown trout and the paté, which came with a wee salad. The trout was excellently smoked and quite delicious without that overpowering saltiness that can occasionally come through in smoked fish. The paté was a loose mix (not set and covered in butter like many pates), and one that worked well with the bread and fish. Though paté has never been my favourite, I enjoyed this version.

The service was a tad hit or miss. We had to ask for bread several times once we got our mains (it was supposed to come with bread or toast for the paté) and the coffee that was ordered by Gary never did materialise until we ordered coffees post lunch. But these quibbles aside, the place was nice. If you somehow find yourself in the local area, make a trip to have lunch at Mhor 84, but do remember to book, else you might not get a seat.

Martha’s – A Quest in the West