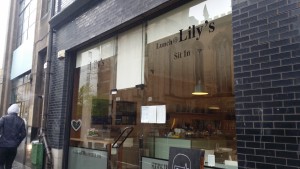 After an early morning launch event for a recipe book associated with the Year of Food & Drink, then a spot of work in my Glasgow office, I tiptoed in between the puddles towards the Merchant City for a spot of lunch at Lily’s, on Ingram Street.

I took a seat at one of their tables in the bright and clean cafe space, which has an informal feel to it, somewhat in spite of the almost antiseptic white interior.

I was then joined by Mark from Food & Drink Glasgow, who like me hadn’t previously visited the place, but had been strangely intrigued by their menu.

Mark was intrigued by the dim sum and steamed buns, so ordered them. The menu noted that these dishes would take 20 minutes to arrive, which they did almost to the second.

I’d ordered some gyoza and their homemade Chinese burger, with the first of these arriving while Mark still had some waiting to do. I was ready to eat so tucked in.

The dumplings were really pretty good, with profuse and lightly fragrant filling in nicely fashioned wrappers. They were smartly presented and topped with sweetcorn, beansprouts and cashews. This all came together rather well, making for pleasing eating. 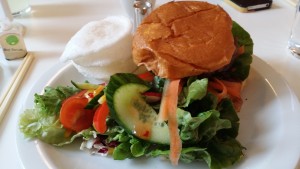 The burger was next to arrive, hotly followed by Mark’s selection of goodies. He was pleased with what he was served.

My burger was made with nicely succulent meat, but the main Chinese element was an overly salty plum sauce. The accompanying salad was crisp and fresh, so brought things back on to a surer footing.

Having finished our lunch, we popped next door to Spitfire for coffee which was really good, as usual.

So overall, Lily’s is certainly in the realm of the “one-off”. It’s a really unusual mix of elements that just about come together. I was quite charmed by the place, and impressed both at the value on offer and at their ability to execute dishes from very different food traditions to a good standard. I look forward to visiting again.