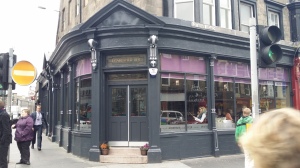 Where Espresso Mondo traded in various guises for many years, Pickle & Custard has recently opened, following a lengthy period of refurbishment. I’d heard slightly mixed reports, but thought it best to visit and make up my own mind.

I enlisted regular guest quester Frances as my companion for the day. I found her safely ensconced in one of the comfy tables towards the rear of the place, when I arrived.

It was almost immediately apparent that service was going to be an issue. There was a mix-up with letting us know what the specials were – confusing asking what they were with placing an order for them. Similar muddles continued throughout.

Anyhoo, we eventually decided that we’d both start with the soup of day, then we’d share one of their platters of lamb and chicken skewers. These took an age to arrive and when they did they came all together. If I’d foreseen this, I would have specified the soup to arrive first, then the platter, which presumably would have sped things up, but hey ho. 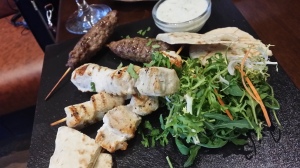 Then came a barrage of four separate requests checking whether everything was alright with our food, the first two of which came before either of us had started eating.

When we did get to the food, the soup was a solidly good effort. It had good texture and packed in plenty of flavour from profuse pieces of chorizo.

The meat skewers were decidedly underwhelming, though. The best I can muster to describe them is to say they were almost instantly forgettable.

Inevitably, having been bombarded with service earlier, we were now transported to a service desert. We thought about coffee, but no-one appeared. We thought about asking for the bill, but eventually settled upon paying at the bar. They didn’t have their card machine up and running, as yet, so Frances (who was very generously picking up the tab) had to pop over to the nearby cash machine.

So overall, shambolic service at Pickle & Custard overshadowed any potential for enjoyment. They’ve spent a lot of time and effort remodelling the place, but I’m not convinced they’re using the space to best effect, yet. The food needs work, but more than anything the service needs a complete overhaul. I’ll come back in a few months to see if things have improved. I live in hope.

We ate: split pea and chorizo soup (2), lamb and chicken skewer sharing board

We wore: colours that matched the furniture