I’m not sure what it is that makes me behave in such a contrary fashion, but the sunshine often makes me head towards basement dining and this was again the case on a fair and sunny day.

Having recently taken over the Rajput (Jackson’s to those with a longer memory) on the High Street, MJ had spotted the arrival of Wildest Drams just the other day. I thought it looked worthy of investigation even though I’m generally predisposed against restaurants with puns in their name.

An elegant wood and stone basement set-up has space for around 30 diners. They’ve launched themselves quite gently so it was a relatively quiet service, but this made for a good, relaxed atmosphere.

At the core of the offering is the notion of matching their game-focussed menu with the excellent array of local beers, particularly from small-scale producers, that have really taken hold in Edinburgh and beyond of late. Given this was a workday lunch, I wasn’t able to try this.

Their lunchtime menu is brief and to the point with three or four starter and main course options. Pretty much everything looked good but I settled upon the mushroom and brie soup followed by the game pie. 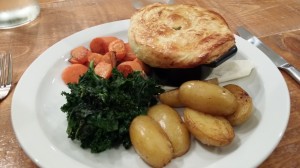 The soup was very good indeed with particularly good range of textures. The brie element was a crisp croquette filled with warmly soft cheese. Much like the soup itself, it was creamy and delicious.

The pie showed similarly accomplished cooking. With lightly juniper-infused chunks in a meaty gravy, this was tasty stuff. The accompanying carrots, kale and potatoes were all very good, too.

So overall, Wildest Drams made a very pleasing first impression. Both courses were delivered to a very high standard. I look forward to visiting again and trying their beer matching selections. I would recommend you do likewise at your earliest convenient opportunity.