With the wonderful Russian Passion now consigned to history, it was good to see the premises swiftly occupied, with the Bluebird Cafe bringing its bright and breezy energy to Canonmills. 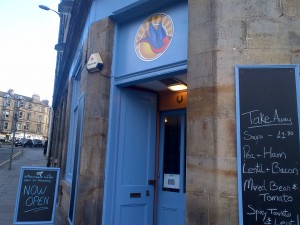 The snug space remains much the same as before, but it has had a bright refresh, giving it a much smarter feel.

The place has room for around ten people, and also does takeaway. There was a balance between the two, during my short stay. 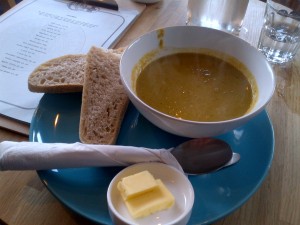 Once I was seated, the friendly owner brought over water, which I sipped while contemplating their menu. They have a good lunchtime deal of soup and a half sandwich for £4.75, but my eye was caught by the flaming chilli frankfurter, so I opted for that, with a bowl of pea and ham soup, from their selection of four different varieties, to start.

The place has a strong country influence, with breakfast items including Tennessee buttermilk pancakes. They have a famous namesake in Nashville, of course, and the country soundtrack indicated a likely passion for that music and culture. 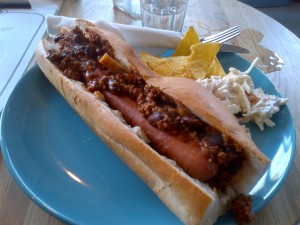 The soup soon arrived looking neat and tidy. It proved to be very good, with bags of flavour and a good rustic texture.

The hotdog wasn’t quite so good, with the chilli lacking the promised flame. I still enjoyed it, and it struck me as the kind of thing a hungover version of me would have considered manna from heaven, but there was a little room for improvement.

I rounded things out with an very good Aritsan Roast Primavera espresso, then with the bill settled, I was on my way.

So overall, the Bluebird Cafe looks to be starting from a very promising position. They have some kinks to iron out, and some menu typos to correct, but I think they have a strong chance of developing into a real local favourite. It’s a place that’s well worthy of a visit, I’d say.