The Huxley had been on our radar since it opened, earlier this year. Today’s quest guest, Ross, and I had been planning to go for a couple of months, but circumstances had conspired against us. We were glad to finally get there for a visit, today.

In an unusual twist, I’d actually ended up popping in for lunch, the previous day, after my lunch of crickets and locusts hadn’t quite filled me up, so this review encompasses both visits.

Firstly, it was good to see the place looking so smart. There has been a bar on these premises for a number of years, but it has gone through a dizzying array of name and décor changes. I think this current incarnation is possibly my favourite, as it has a nice, relaxing, tweedy feel to it.

Service was pretty good, throughout, with helpful suggestions offered, and regular checks made to see if we needed anything else. 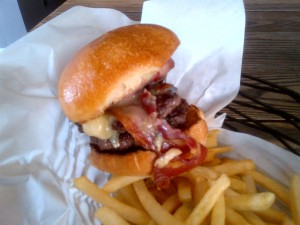 My first visit saw me sample from their hot dog menu, choosing the “naked” dog. I’m not really a hot dog person, mainly because I think of them as a snack item, and I’m still rather rigidly a three-square kind of chap. Given that I’d already partially lunched elsewhere, a snack fit the bill, but I can’t say it was anything that particularly rocked my world.

On today’s visit, we ordered something of a fatboy special, with three sandwiches to share between the two of us. I was set on trying the burger, so ordered their sou’wester, which showcased Dunsyre blue cheese and Carluke bacon, atop their steak burger. Ross ordered both the pulled pork, which we shared, and the po’ boy, a Louisiana-style shrimp sandwich, with which I was not previously acquainted. 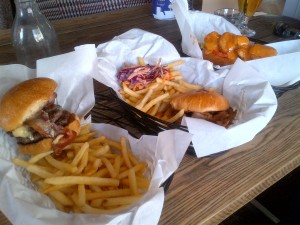 Things arrived together, accompanied by oodles of skinny fries. I tried one of the prawns on Ross’s po’ boy, and it was good. He wasn’t too impressed with the bun it came in, though. The burger looked really good, with two patties showing a good glisten, hinting at moist delights. It didn’t quite deliver, though, and whilst good, was not quite as tasty as it looked. Their pulled pork was alright, but rather too lukewarm and dry for my tastes.

So overall, the dishes we had at The Huxley were fairly good, but nothing was particularly outstanding. The Innis & Gunn lager, which Ross sampled, was excellent, but that’s hardly a major revelation. Their menu lends itself well to snacking while enjoying a beer, so definitely has an audience; it just doesn’t happen to be me, at least not at lunchtime. I’ll be back for drinks, I think the place is very smart, but I can take or leave the food.