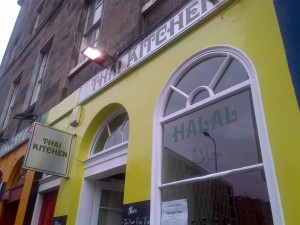 Edinburgh’s restaurant and café turnover is steady, without being alarming. More often than not, when somewhere closes, a new place springs to life in its stead. Such is the case with the passing of Saborsito and the arrival of the Thai Kitchen.

Having been open for around three weeks, they’ve timed things just right to welcome back the student influx. On the Friday lunchtime that I visited, the place was queued out of the door, with people flocking to try their inexpensive, simple Thai dishes. 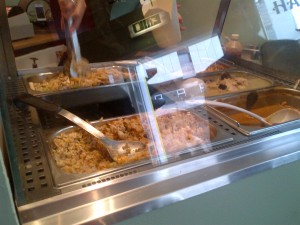 There’s space for around half a dozen folks to sit in, but mainly this is takeout territory. I kept things very simple, choosing their £5 chicken pad Thai.

Dishes aren’t cooked individually to order, but there’s a quick turnaround from the kitchen, with trays regularly replenished. The friendly counter people quickly scooped up a portion of noodles, then topped things with peanuts, chilli, and lime, in the traditional style. 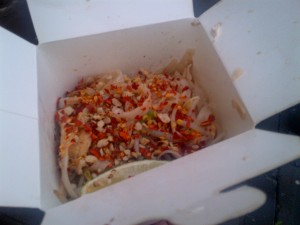 I ate as I walked, as I was feeling a little too hungry to wait. This was a smart move, as the noodles weren’t overly warm, and wouldn’t have benefited from the fifteen minute walk back to my office.

Sadly, things were rather disappointing, with incredibly bland noodles and chicken brought to life only by the toppings. It was nowhere near the quality of the same dish I’d sampled at the Pad Thai stall run by Bluerapa, a few months back.

From the other dishes I saw on offer, I suspect they’re capable of significantly better, so I’ll not deliver a scoring verdict today.

I like the idea of this place, and there’s definitely a market for it, as evidenced by today’s queue, and the great popularity that the Ting Thai and Pad BKK pop-ups achieved during this year’s Festival. The Thai Kitchen has a lot of improving to do, though. Go along and try the place for yourself, but I’m not convinced you’ll be too impressed.

Pig in a Poke