Some days, putting together a review is a straightforward task, which is completed in a matter of a few minutes. Then there are some places that are a real challenge to sum-up. The Potting Shed, new to Potterow, falls into the latter camp. 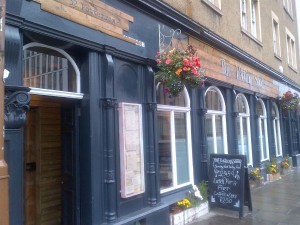 This was my third visit. I’d popped in during the Festival, when it was freshly open, then was in the other day for a pre-dinner drink before another great meal at Field. I’d enjoyed the drinks on offer, but hadn’t been convinced by the place, as yet.

My main issue was that I’d found the décor extraordinarily over-styled, trying way too hard, and generally a complete turn-off. A couple of friends shared this view, but I’ve heard others who really liked it, so it’s definitely in the “marmite” category. To offer as balanced view as I can muster, it’s clean and tidy, so can’t be considered anything below “good”, but boy is it not to my taste. 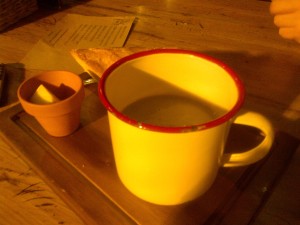 What brought me back, you might ask? Two things: firstly, Simon, today’s lunching companion, had suggested it; and secondly, my much valued wine expert, Frances, had visited and declared the food to be perfectly acceptable.

Their menu is quite extensive, and includes a little “lunch for a fiver” selection, from which Simon chose their spicy chicken and chips. I opted for their soup of the day, which was leek and potato, followed by their burger, from their main a la carte. 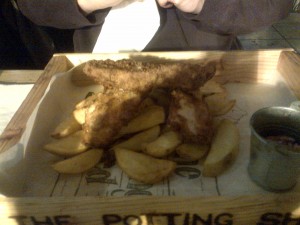 My soup arrived first, neatly presented in a camping crockery mug, which brought to mind Woodland Creatures and Freeman’s. The soup was good, without troubling the upper echelons of Soupquest. 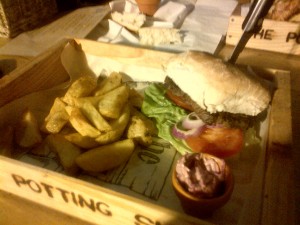 For £5, Simon’s portion of chicken was extremely generous, and he was full of praise for its good balance of flavours. He liked his chips, too.

I found the chips really good, also, but the burger was just plain odd. The bun comprised two small burgers, which were quite lightly cooked in the middle, which looked promising, but had a really curious dry and crumbly texture. They had a hint of beefy flavour, but were almost entirely bereft of moisture. I was left rather confused.

Throughout this, I’d been enjoying my first opportunity to sample Roots Soda. I was really impressed with their Hoodoo, which featured citrus fruit, hibiscus and chilli. Simon enjoyed his Kaleidoscope, too.

So overall, it was a really mixed bag from The Potting Shed. Décor aside, I liked the sound of their menu, and their soup was good. The £5 lunch menu looks to be really decent value, too. But their burger was very far wide of the mark, for me. Their kebabs did catch my eye, on this visit, so maybe I should come back and give them a go. For now, go to the Potting Shed for a drink, be it to sample the excellent Roots Soda, or to try their extensive selection of craft beers. The jury is still out on their food, though.

We ate: leek and potato soup; burger and chips; spicy chicken and chips