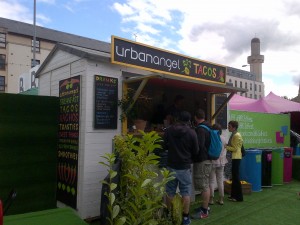 As I may have mentioned before, I’m not the best at taking advice. Usually this manifests itself in me not going to places I should. In the case of today’s lunch, it related to a place I’d heard mixed things about, but as I’d already planned in a visit, I thought I’d make up my own mind.

Urban Angel is a great Edinburgh favourite, although we haven’t had the best luck on our visits. They’re a great purveyor of smartly prepared, ethically sourced dishes. 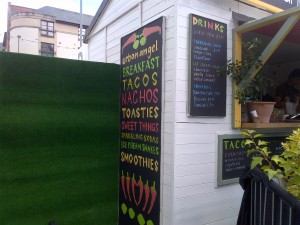 They’ve set up a little taco stand, at the BBC Fest, with a view to bringing simple Mexican fare to the Edinburgh masses.

I opted for the corn and courgette tacos, which comprised three small tacos (£4.50). They soon appeared, accompanied by an under-seasoned tomato salsa. 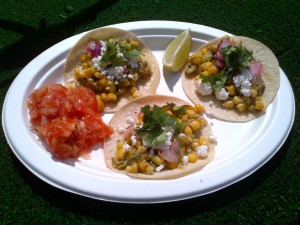 The tacos proved massively impractical as a street food item. The tacos quickly became soggy, and the ability to form them together into usefully compact parcels eluded me, entirely.

The corn had some good flavour, but the courgette was lost in the way too mushy centre.

Overall, the tacos from Urban Angel were unsuccessful as a usefully tasty street food eat. They demanded much more dexterity than I was capable of delivering. The filling items didn’t come together well, either, so it’s not somewhere I’d recommend.