It’s good to celebrate milestones, particularly when they are not related to inevitable things, like advancing age or the passing of the seasons. Our celebratory milestone, today, was our 1,000th Twitter follower, as when we were approaching that landmark, we offered to buy lunch for the lucky person who took us in to four figure territory. 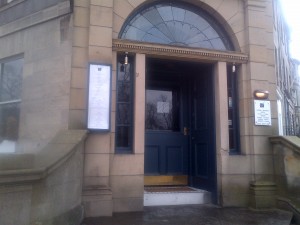 You’ll hear from the lucky winner, Kris, later in the review, but it’s safe to say that she was charming and engaging company, and sets a very high standard for our next landmark follower to emulate.

In a nice coincidence, today is also our 500th post on Lunchquest, which isn’t bad going, given we only started the site in August 2011.

Mark Greenaway’s premises on North Castle Street, to which this was my first visit, seemed like a fitting location for the occasion. We have, of course, reviewed Mark’s restaurant before, but that was when he was at his previous place, on Picardy Place. We had reviewed this North Castle Street location, when it was Librizzi, too, so today was a great coming together of various strands of joy.

The interior of the place is much like it was in its previous incarnation. It’s quite a relaxed and informal place, styled like a smart bistro, with an impressive central lighting feature. It doesn’t have the impact of the Picardy Place dining room, which I felt had a much more refined elegance. 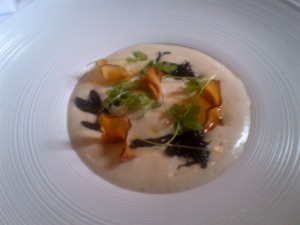 There’s a slight problem with the entrance-way to the restaurant, too, as this tends to be the place where the waiters and waitresses congregate, but it’s something of a constrained bottleneck.

These niggles aside, the dishes on offer retain the same exceptional quality that Mark’s cooking has always exuded. The menu had a familiar air to it, but seasonal variations were interwoven, as you’d expect from a chef with a solid commitment to local sourcing.

We chose from the market menu, where I decided to tread a familiar path, with soup, in the shape of an artichoke veloute, and roasted cauliflower risotto. Kris opted for the ham hough, followed by the sea bream. Kris took a recommendation from sommelier Loic for a suitable wine to accompany, while I stuck to the sparkly water, given that I had a return to the office scheduled for later in the afternoon. 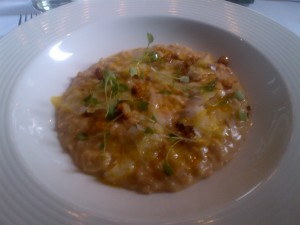 Starters promptly appeared, and looked highly elegant. My soup was first rate, with lovely textural variety, and the poached hen’s egg lurking in the depths was a wonderful touch.

The main course risotto was another highly accomplished dish. The ooze levels were perfectly judged, and each forkful was a deeply flavourful delight.

Although I’m not a great dessert fan, I’m often hooked in by the treats on offer, here. I urged Kris to try the signature peanut caramel cheesecake, while I opted for the rhubarb fishbowl. Its wonderful blend of textures and flavours was full of palette pleasing panache. 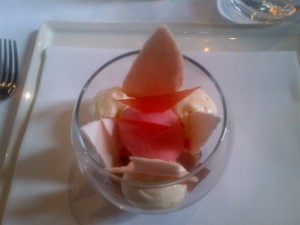 Good espresso and delightful petit fours rounded out what had been another highly enjoyable lunching experience.

So overall, culinary standards have been maintained at Mark Greenaway’s new place, and everyone seems happily settled in to the new surroundings. Lunchtime trade is certainly brisker, which is excellent news. I’m not overly convinced by the look and layout of the new place, but these are kinks that will happily be ironed out in time, no doubt. The message remains the same: this is a high quality establishment, a firm Edinburgh and Lunchquest favourite, and a place to which you must go, at your earliest convenience.

Restaurant Mark Greenaway has been on my ‘must eat’ list for a good while now and how it’s taken me this long I’m not entirely sure. I suspect my mischievous and rather noisy 2 year old might have something to do with it. As a restaurant catering better for those without children in tow, I was delighted to become Lunchquest’s ‘special guest’, having bagged the 1000th follower spot on Twitter. 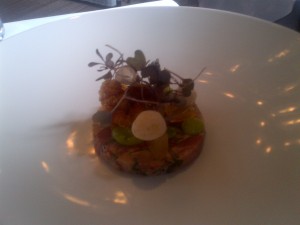 As we had never met before, I met Blythe for lunch last Thursday feeling a little apprehensive but it was great and so was the food.

Mark Greenaway, at 35, has created quite a reputation for himself. He has 3 AA rosettes under his belt, was voted rising chef of the year in 2011, was shortlisted for Restaurant of the Year 2012 and recently appeared on Great British Menu (for the second time).

Mark’s restaurant now occupies what was formerly Librizzi. Now with a clean, fresh make over, soothing blue walls, bistro chairs, vintage chandeliers and custom stainless steel, it has a very unfussy, laid back feel. We dined on a particularly blustery day and there was a fair bit of whistling through the windows, which was a bit distracting, but it’s just something that comes with the beauty of Edinburgh’s traditional sash and case windows. 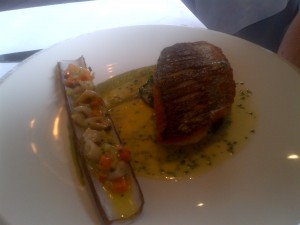 Never one to pass up a soup course, Blythe ordered the Jerusalem artichoke veloute, velvety smooth and super shiny. I didn’t get a taste but it seemed to tick all the soup expert’s boxes. I was busying myself with my ham hough and pork ballotine, served with a beautifully sweet, seared scallop and tiny chewy apple meringues, and a contrasting wild garlic mayonnaise, both in colour and taste. This really was a stunning looking dish, with a taste that far surpassed its appearance.

Our mains followed suit, with an impressive crispy-skinned, flaky-fleshed sea bream fillet accompanied by razor clams and butter sauce. Blythe’s cauliflower risotto was as silky as expected with a soup like consistency, tiny nuggets of cauliflower and al dente rice.

I’m not normally one for desserts but was easily talked into the peanut caramel cheesecake. This is an almost infamous dessert that, like many of the dishes, has followed Mark from his previous home in Picardy Place. And rightly so! 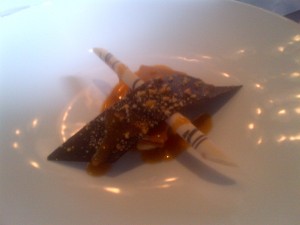 A peanut butter wafer construction, surrounded by warm toffee sauce (poured at the table) with tempered chocolate, studded with roasted nuts, a dessert truly worth loosening the belt buckle for.

Blythe’s rhubarb and custard fishbowl was a more delicate affair. Rhubarb sorbet was accompanied by tiny meringues, rhubarb compote, fluid gels and crisps, displaying a love of modern techniques, making for an interesting, palate cleansing close to a meal.

We finished with good espressos that were delivered promptly so they were at the right temperature (lukewarm espressos are a pet hate of mine) and petit fours, which were yet another showcase of the kitchen’s talents with all things sweet.

This really was a beautiful lunch. The time, consideration and construction of the dishes is something to be marvelled at, yet the flavours are simple, unfussy and complementary. The staff are efficient, friendly and clearly happy in their new location. I hope Mark Greenaway’s flourishes to become a firm favourite in Edinburgh’s restaurant scene. It’s a new one in mine!

Burns Night at The Pantry