Given our constant appetite for new places, we get quite a number of suggestions about venues to try. We even get the odd recommendation from some of the chefs that we chat to on Twitter, although their track record as good judges isn’t quite as impressive as you might think. 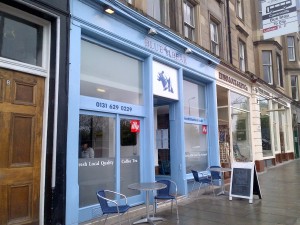 One of our favourite tweeting chefs is Craig Smith, late of the Purslane and Antiquary, and now plying his trade with Baxter’s, in their development kitchen, near Elgin. He suggested, a wee while ago, that we should head to Cafe Blue Bear, as he’d been served an impressive breakfast there, shortly after they opened. Today was the day we finally got round to following Craig’s steer.

I was joined for this Sunday quest by Mel and Milo. Mel most recently joined at Field, while Milo, of Clear-Minded Creative fame, had joined most recently at The Outsider. 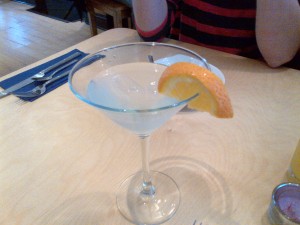 I’d been working up an appetite over the course of the previous four hours, by walking all around our fair city, including a nice wee jaunt up the Braids. I was plenty hungry enough when I arrived at Blue Bear’s smart, Canonmills premises.

With a range of art works bedecking the walls, the places has a relaxed and contemporary feel. Service is similarly pitched, with attentive waiters and waitresses keeping things bright and breezy. 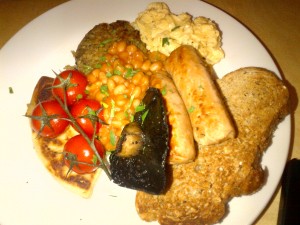 Their menu focusses squarely on breakfast, with their concept that breakfast staples should be valued as quality dishes throughout the day. It’s a sound notion, and their range boasts a good breadth of choices, from waffles to French toast, cereal and porridge to egg dishes, as well as full breakfast combinations.

I was happy to go with their full breakfast, the Big Bear, which came with coffee and juice for a couple of quid extra. Milo opted for the veggie equivalent, while Mel went for a classic eggs royale. We accompanied things with various coffees and juices, and I was also hooked in by mention of their breakfast martini. 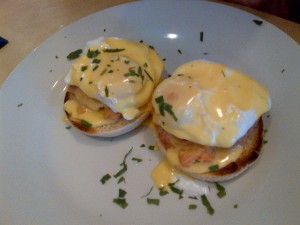 Coffees arrived and were well-made and solidly decent. I’m one of those of the view that Illy beans make a slightly characterless espresso, and this was the case, here. The longer coffees were more successful, but it might be an idea to change to a more inspiring bean provider.

Our food soon arrived, with each dish looking very promising. My breakfast offered a pleasing range of items, and was accompanied by a really good looking slice of bread. 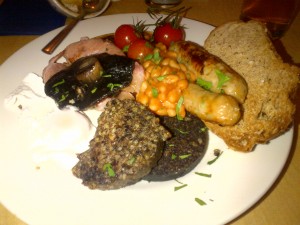 There was a strong sense that they’d applied due care and attention to the selection of each item, with the haggis and black pudding in particular proving very good, and the rustic bread tasting every bit as good as it looked.

The sausages rather let things down, though, as they were curiously bland. The yolk of my poached egg needed to be a good bit runnier for my tastes, too.

The dish did the job very nicely, though, and was certainly one of the better breakfasts I’ve eaten, of late. It just didn’t quite hit the heights in the way it could and perhaps should have.

So overall, I was pleased with Cafe Blue Bear, and would be happy to send people there, if the request was for a place with an excellent range of breakfast options. I admired it more than I loved it, though, as I still think there are a number of areas that could be improved. If they’re able to keep developing their offering, they have a solid opportunity to build a rewarding niche for themselves, so I look forward to a return visit to see how things are progressing.