William Street’s trio of pubs, comprising Teuchters, Bert’s and The Melville was reduced to a duo when the latter closed its doors, late last year. It was good news all round to see fitters in the place, heralding the place’s return to operation, just recently. 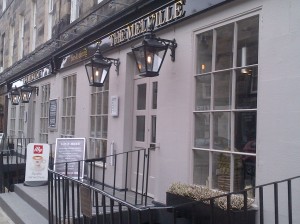 With its newly refurbished premises now open, I thought it was worth a visit, particularly given that I’d noticed they offered a Sunday roast. After a long morning of walking in the bitter cold, in preparation for our upcoming Pennine challenge, I was plenty hungry enough, so a meat feast sounded ideal.

I’d popped in previously, for a quick drink, so I was used to the much changed interior. The stylings are sleek and modern. It is somewhere between upscale bistro and style bar. That somewhat describes the menu, too. 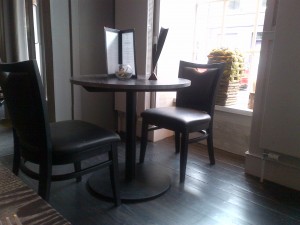 During the week, it serves a range of pub and bistro classics. On Sundays, they serve a pared-back selection, with a small selection of starters, then a roast, pasta and catch of the day. The roast was lamb and the soup was carrot and coriander, so I opted for that.

The soup arrived, promptly. It had a centrepiece of caramelized orange over which the barman/waiter poured the soup from a small jug. This was all very fine dining. The soup itself was very good, with a nicely judged consistency and balance of flavours. I’m not sure what the orange added other than an interesting extra texture, but it hinted at the level of refinement they’re seeking to achieve with their dishes. 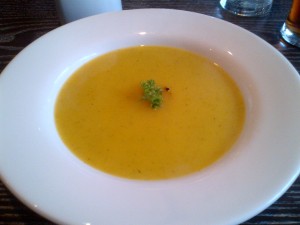 The roast was similarly chic in its presentation, with the lamb’s accompanying mint sauce in the form of cubes of mint jelly. The gravy was presented in the same style jug from which the soup had been poured.

The dish wasn’t quite as good as it could have been, with the generous slices of lamb not packing as much flavour as might have been expected. The mint jelly rather dissolved in the warm gravy, too. The braised cabbage was excellent, though, and the little chantenay carrots rather lovely. It was certainly a plate packed with elegance. 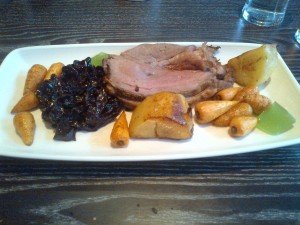 So overall, The Melville seem to be aiming at delivering a high level of culinary excellence, in a bar/bistro setting. In terms of presentation, they are hitting the right notes. The service has the potential to develop to that high standard, starting as it does from a pleasing level of accuracy and friendliness. The food, likewise, starts from a strong starting point, so there’s every chance for it to develop, too.

My only concern is that at their current price point on Sundays (2 courses for £16.95, 3 for £20.95) they’re basically priced as fine dining. The kitchen seems comfortable with that, and I think they show signs of being capable of delivering to that standard, once things are fully bedded in. However, work needs to be done to carve out a niche and build an audience for this, otherwise this potential gem may go unappreciated.