When the Total Food Geeks suggested a trip to the New York Steam Packet, I was glad to accept the invitation, as it’s the kind of place that you need to go with a group, not least given its slightly unorthodox location, in Rose Street Lane North. 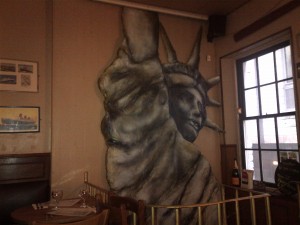 Like a secret little upstairs Captain’s mess, complete with wise-cracking galley master and a waitress full of smiling charm, there’s an awful lot to love about their operation.

The menu is focussed and to the point, offering excellent mid-week value, with three courses for £14.

We hummed and hawed with the menu to such an extent that the waitress offered to bring us a big platter of all the starters. Of course, I still wanted soup, which duly appeared, with little sample mugs around the table for those who joined me in soupy devotion.

My soup, which was sweet and herby, was the pick of the starters. It was really very pleasing with its light texture and well-judged seasoning. 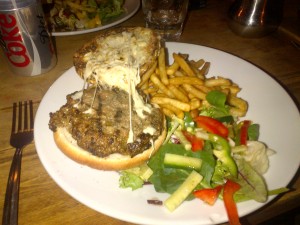 We were a full house of burgers, round the table, across various styles, fillings and toppings. The kitchen offered up the opportunity of a special haggis burger, which I was more than happy to give a whirl. The ever helpful waitress told me that they had a beef burger in reserve if the haggis didn’t float my boat.

They needn’t have worried, as the haggis burger was properly good. It managed to convey a burgerish solidity, without ever tipping over towards being merely a generously portioned haggis roll.

I’m no particular fan of desserts, but I managed to shove down a portion of chocolate fudge cake. It was good, as were the other desserts sampled round the table.

So, overall I found the New York Steam Packet to be full of welcoming bonhomie. I enjoyed my soup and haggis burger, muchly. It’s a place I’d recommend next time you’re looking to take a small party out for an evening of informal meaty delights.