Lose weight and get fit…these are two of the most common New Year’s resolutions. After excessive eating and drinking for the whole holiday season, it’s only natural that a feeling of guilt should follow and these resolutions are made. We promise to start dieting and going to the gym. We make drastic changes to our diet and start eating oats for breakfast, fruit for lunch and vegetables and brown rice for dinner. We might even stop going to the pub as much, and we start hitting the gym. It is not a coincidence that gyms offer deals and promotions in January, and that it is one of the busiest times of the year. However, research has shown that 60% of gym memberships go unused, and attendance is usually back to normal by mid-February and the diet is also long gone. The simple reason for this is that people have committed to too much, too fast!

So here we are, just past mid-February…have you kept your New Year’s resolution? 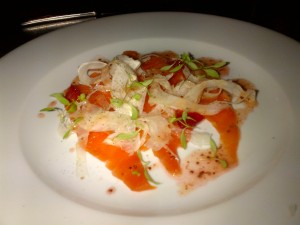 Don’t panic if you haven’t! There are much more effective ways to shed the holiday pounds than starving ourselves and signing up for boot camp. Instead of starting a diet that you cannot possibly keep, focus more on having everything in moderation. You probably hear that word a lot, but moderation is the key to losing weight, and keeping it off.

The best way to stick to a diet is to make goals that you can actually reach. People often get impatient and want results fast. Fad diets are great for losing weight quickly, the only problem is that they are usually so restrictive that many dieters cannot stick to them and gain all the weight back as soon as they start to eat normally again. With weight loss, the best way to lose weight is to make small, realistic goals, and by eating foods that you actually enjoy. Simply but cutting down on foods we already eat, we can start saving some calories.

Bigger meals - good, but not quite as good as smaller meals

Another option when trying to lose weight is to work on increasing our metabolism. You will often hear about metabolism when talking about dieting, and more often than not people will say they have a low metabolism. The truth is that most people do not know what their actual metabolism is but it’s the easiest thing to blame for not losing weight. Our metabolism is based on several factors including age, gender and muscle mass, and not everyone burns calories at the same rate. Metabolism naturally slows down around 5% per decade after the age of 40, men generally burn more calories at rest than women, and the more muscle you have, the higher your metabolism. Genetics also play a role in metabolism, however, there are a few things that can help boost it.

Unknown to some, the more weight you carry, the faster your metabolism is likely running. Extra weight causes your body to work harder, which most of the time, results in a faster metabolism. This is also one reason why it is usually easier to lose weight at the start of a diet and harder later on once you have lost some weight. If you are overweight, you most likely already have a fast metabolism, which means that any small cuts in calories will result in immediate weight loss. Once you lose the weight, your body needs fewer calories to sustain itself, which is why it is so easy to regain any weight lost.

Two of the best tips for boosting your metabolism are exercise and eating smaller meals more often. Since muscle burns more calories than fat does, exercising will build more muscle, thus increasing your metabolism. Leaving too many hours between meals (or skipping meals) actually slows down your metabolism. When you restrict the amount of calories you consume, your body enters its “survival mode” and uses fewer calories to function, which means burning less and slowing down your metabolism. Eating small, frequent meals keeps your body working, burning off more calories. Some studies have shown that spicy foods and green tea slightly increase metabolism, but this is not enough to make up for eating too many calories.

So, instead of attempting some crazy diet and wearing yourself out at the gym, have smaller meals more frequently, cut down on the total amount of food you eat during the day, and make sure you get some physical activity into your routine to build some more muscle and boost that metabolism. If you want to set yourself a goal, make sure it’s something small to get you started, and something you can actually reach. You will feel good when you reach your goal, then you can move on and set a new one!

Time to catch up on some Zzzzzzzz!