Both MJ and I are great fans of Union of Genius, the soup cafe on Forrest Road. 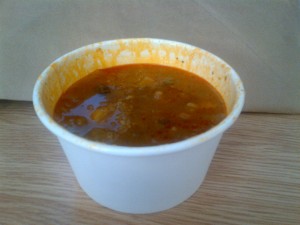 Open since October 2011, their excellent array of soups has been delighting Edinburgh punters since then, in no small measure. Their soup is part of that rare club, the Soupquest “exceptionals”.

As you may have heard across social media, recently, they’re in the midst of a Kickstarter drive, with the aim of funding a new commercial kitchen to bring soup to more people across Edinburgh.

You see, from their beginnings on Forrest Road, they now supply soup to a lot of Edinburgh cafes. Ronde, on Hamilton Place, recently came in to the fold, joining French Press, Printworks, Razzo, Wee Boulangerie, Brew Lab, The Third Man and many others. 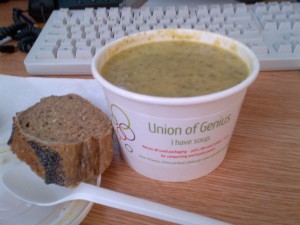 The Kickstarter is going well, so far, with 45% of their target met (as at time of publication). The middle chunk is now the hard part, so that’s where you, dear readers, come in.

We need to re-double our efforts, over the next couple of weeks, so we can deliver that whiff of victory to Elaine and her wonderful team. Once they get the scent of success in their nostrils, I’m sure they will bring home the victory, but it needs to be a concerted effort by all.

So, if you’ve already made your contribution, thank you. Please circulate the Kickstarter link to even more people, and berate them until they contribute, too.

If you haven’t pledged your support yet, get busy and make it happen. This is a tremendously worthwhile enterprise, with excellent principles at its heart, which brings together a number of local businesses, charities, and initiatives.

And if that doesn’t convince you, some of the goodies you get for pledging include a soup masterclass, some snazzy t-shirts, and even soup everyday for a year with the “Golden Soupon”.

The Kickstarter closes on Sunday February 17, at 1:25pm. Let’s make this happen!