MJ’s Verdict
What a wonderful way to usher in the first few days of what I insist will be my lucky year! The ever-lovely lady who brought me to Edinburgh was in town and she introduced me to a few new characters who I am certain will pop up in future reviews. We all went over to the Salisbury Arms, which had undergone a make over in past years and turned from a studenty place to a warm and welcoming pub/restaurant. The wooden walls and soothing tones of the tartan chairs and chic, occasionally mismatching furniture combined with the fire in the middle of the room, an elegant feature, made me immediately sad that this pub was not near where I live.

We were seated and while we waited, B opened his gift from the family MJ and was generally delighted. After everyone arrived (all 6 of us) we studied the menu, and I was pleased as punch to know that I am not the only person who goes online to look at menus pre-dinner; thankfully another foody did that too.

After some dithering, I opted to go for the honey fig and prosciutto starter with a salsa verde and follow that with the large super salad.  I have to say that we did quite well: we all ordered different things and included an order of the baked cheese for 2 to share among us. To my left was a plate of the kidneys, which looked less elegant than my pretty dish of figs and prosciutto, but was not lacking in depth of flavour. My dish was a nice pairing of the sweet figs with the salty ham and the salsa verde was a nice, fresh contrast and was nice enough to keep eating once the main part of the dish had been devoured. The crab and crayfish salad was nicely judged in seasoning and had a hint of the ocean and a dressing mixed in that was so light, it just helped hold it together without overpowering the subtle flavours. The seafood mezze was a big dish that had crisp calamari, giant prawns in a bowl of herbed and spiced butter, a bit of salad with a balsamic dressing, crab and crayfish salad, and some dips and toasted wrap pieces. All of which were well-judged in flavour.

I’ll leave B to tell you about his soup and the cheese, but judging by the way every scrap of cheese was hoovered, I suspect that the Salisbury Arms has a good supplier.

Once we demolished the starters, our fabulous servers cleared it all away and we refreshed out drinks. Soon the mains arrived. The pork belly came as a starter size portion (as ordered) and it was still a nice size and was appreciated for it’s matching of flavours. My salad was huge. I was so pleased with the way it looked that I immediately asked everyone at the table what the white bits were, they looked to be either cottage cheese or something of the sort. We all tasted it and had no idea, when I asked the waitress she told me what came on the salad again and a few minutes later returned to ask how I liked my Soya (tofu)  on the salad (I love that she didn’t call me an idiot, and just clarified-made me smile and appreciate her). The salad was a fresh mix of edamame and peas, roasted peppers and seeds. The dressings were a choice of an herbed oil with a touch of mustard in it, and the cumin-laced yoghurt one that had a unique sweetness to it.

The prawns were massive and well cooked, and the poached salmon with a veloute on a bed of potatoes, kale and broad beans was quite nice, I even switched the last bit of my greenery for the last bit of salmon, which was seasoned dead-on.

Overall, I was very pleased with the Salisbury Arms and their food, pricing and even their promotions for the month are well judged and I heartily recommend you go. And if you take me along, we can use my £10 off card (or £20 off the next time before the end of Jan).

Blythe’s Verdict
With 2013 still barely underway, we found ourselves in need of a good feed, and weren’t looking to spend the earth, so we decided that pub grub might me the way to go. I suggested the Salisbury Arms, and MJ seconded the motion. 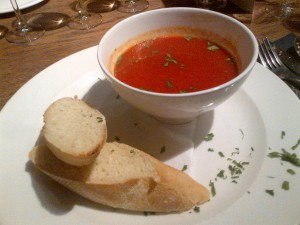 We were joined on this quest by Kathryn, Silvia, Jeanne and Michael. Michael has a strong appreciation of good food, as evidenced by his popular recipe blog, which you can visit at http://www.fourman.dsl.pipex.com/recipes

It had been many years and a couple of changes of ownership since I last visited these premises. The change was considerable. The style is now wood and tweed, with stylish gold-lined lampshades like the ones that used to grace Mark Greenaway’s old place. The place was buzzing with punters on what was a very sleepy night in Edinburgh, evidencing its solid popularity as a dining spot. 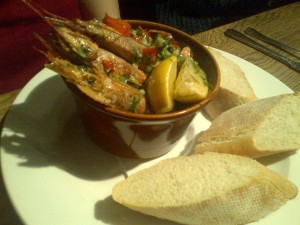 From their well constructed menu, I opted for their soup, tomato and red pepper, as well as going in on a sharing cheese platter, featuring goat’s cheese brulee and baked camembert, with Kathryn and Michael. For main, I opted for a hearty sounding pulled beef and bacon pie, served with cardamom carrots. 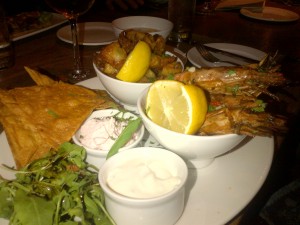 When the starters appeared, carefully brought out by our excellent battalion of waitresses, we began to attack the dishes, with considerable collective relish. It was very much a group effort, with no ceremony stood on, as we shared and shared alike. Highlights were the calamari, giant king prawns (which also reappeared in Kathryn’s main course) and the excellent cheeses. My soup was probably the weakest dish of the lot. It was good, but not much beyond that, which was a shame.

We probably could have called it a night at that, as we’d eaten a huge amount of grub. Main courses were duly presented, though, and we approached with renewed vigour. My pie was really good, with rich, tender meat in a thick gravy. Additional gravy was used to unite nice mash, and accompanying carrot and onions that were spiked with whole cardamom pods. 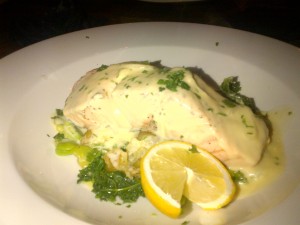 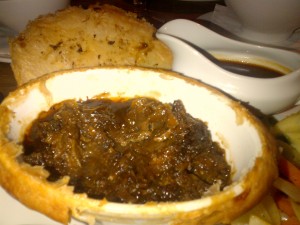 Beef and Bacon pie with its top off

Aside from further excellent prawns, there was lovely salmon to try, and MJ’s gargantuan green salad looked rather good, too. Nice chips were used to try various sauces and dressings, including one that was powerfully laced with cumin.

There was no danger that we could attempt dessert, as we were full to the gunwales. Good espresso was all that was required, before we contemplated the very reasonable costs that we had incurred.

Overall, the Salisbury Arms was extremely impressive. Each element of their offering, from the stylish, country-pub-feel decor, to the outstanding service, to the look and taste of the dishes, was incredibly well judged. For food in a pub setting, it’s right up there with the best that Edinburgh has to offer. I’d happily go back, and would heartily recommend that you do the same.