Run by the same lovely folks behind popular George Street Italian, Centotre, The Scottish Café & Restaurant routinely garners trade awards, and attracts great praise for its local and ethical sourcing of ingredients and commitment to local providers. Part of the National Gallery on The Mound, it’s an extremely popular spot, and seems to be very popular with those entering their early prime, if today was any guide.

I was dining with Ayla, today, who is five months old, and her parents, Mina and Patrick. They were all visiting from Istanbul, so were delighted with our smashingly warm weather.

From a lunchtime menu offering two courses for £16.50, alongside a range of dishes of the day and daily specials, I chose the Cullen skink. Patrick opted for the steak pie, which he had also tried a couple of days before, while Mina, too, stuck with her choice from their previous visit by choosing the Shetland hake. 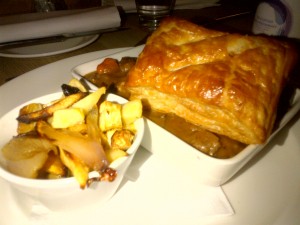 The place has two main sections, with an informal canteen-style area, which was packed full, focusing on lighter bites and coffees, and a more formal dining area, where we were seated. The place is lightly studded with artworks, befitting its place as Gallery restaurant.

Service was decidedly on the slow side, but the various requests that inevitably arose through the course of the meal were accurately met. There was a little mix-up with the bill, at the end, but this was swiftly rectified.

Not much effort had been made to make my dish look anything other beyond a bowl of lumpy soup, which was a little disappointing.

The soup was very good, though, with a pleasingly rustic thickness to it, which has been absent from the last couple of skinks I’ve tried. Good chunks of sweetly smoky fish and soft potato kept things nice and hearty. It was a main course portion, but £12.95 for what still amounted to a large bowl of soup felt a tad over-priced, to me.

As you dine, the views are impressive and the place is rather smart, so it’s always going to be a winner with visitors and tourists. I admire the place for what it’s doing, but I’m just not convinced that the quality they’re offering is all it could be.

Mina and Patrick love the place, and tend to visit on multiple occasions, when they are in town. They are far from alone in their appreciation of its charms. Ayla and I remain to be convinced.