After a trip to watch the new Bond film, Skyfall (which is very silly, indeed), a mob of us headed to Kampung Ali for a Malaysian-fuelled post-film analysis session. 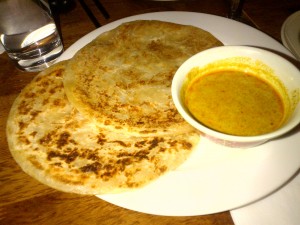 The owners have kept some of the features, notably the elaborate ceiling, and layout of the previous Italian restaurant on these premises. The place is quite different from their sister outlet on Nicholson Street, which has much more of a canteen feel to it.

On our Saturday evening visit, it was mobbed, with a loud and celebratory feel to the place. Later in the evening, I’m told that karaoke breaks out, adding to the party vibe. 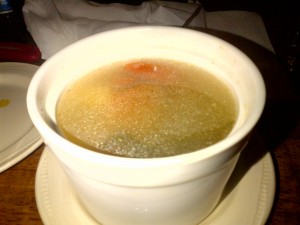 They offer BYO, with a £3 corkage charged on each bottle. We’d accordingly stocked up at a nearby bottle shop, and by our standards had judged the amount of booze required, quite accurately. The extremely slow service played a part in that, though, as there were long waits to negotiate.

Lunchquest’s tie man, Phil, was in attendance, and ordered some roti cenai for the table to nibble on as we contemplated the menu. These were OK, but not of the same quality as the ones we sampled on our recent visit to Nanyang.

Once ordering had finally taken place, and then dishes produced, I tucked in to my starter which was a vegetable and tofu soup, with sliced pork. It came in a smart little pot, which was a nice touch. The soup was good, with a light broth filled with various well-prepared items. 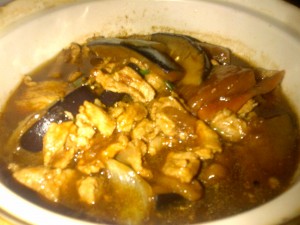 The main course of salted fish with aubergine and belly pork was less successful. The flavour was a rather generic savoury. The main element of the dish had a texture that was awfully similar to the sliced pork in the starter soup, so I suspect that’s what it was rather than being salted fish. The aubergine offered a texture difference but little native flavour.

In comparison with both their Nicholson Street branch and Nanyang, I think Kamping Ali is not delivering dishes to the same standard. They have an excellent range to choose from, but I think they’d benefit from a shorter menu that concentrates on delivering better quality. Having said that, their chicken rendang looked very good, and the butter prawns were huge and plentiful, so there are good dishes in amongst the mediocre ones. Certainly, the service needs to be a lot better, as even though their restaurant was full, they had enough staff members working to deliver things in a much more efficient way.