It’s a while since we’ve visited one of the big chains (La Tasca’s modest 70 outlet chain, aside), to see whether their popular offerings really stack up, so today we turned our attention to Subway, the purveyor of “Eat Fresh” sandwiches. 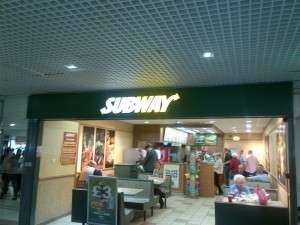 Since it first opened its doors in Connecticut in 1965, Subway’s franchise model has grown to be one of the biggest in the world. They even have the “University of Subway”, to train their staff across the huge support network.

Other nuggets from their website include extensive detail on their commitment to healthier eating, minimising their environmental impact, and building links with their community. This is all good, commendable stuff.

But what we were focussed on, today, was assessing whether their sandwiches actually tasted any good. Sadly, the verdict was “not really”.

Regular quester Gary, who has joined for all the previous chain lunches, was again my able assistant. We toddled along the short distance from the office to the Subway shop in St James’ Centre, and joined the short queue. 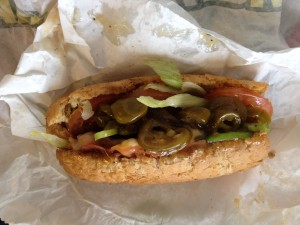 The place was clean and presentable, with adequate room for queuing and a straight forward way of managing the flow of customers. Service was managed by production line, with a roll slicer and filler, a salad filler and dresser, then a till operator to manage the financial piece of the puzzle. It was perfectly efficient, if a little impersonal.

Gary opted for a chicken and bacon ranch melt, while I opted for a BMT, which contained salami, pepperoni and ham, along with a little cheese. This was toasted for me, following my accession to the request, then all the various salad options were piled on. A little honey mustard dressing (low fat) topped things off, then the roll, which was of the Italian herb and cheese variety, was scrunched in to a wrapper, for me to carry back to the office.

Once there, I unpeeled the layers to reveal a rather sad looking offering. Yes, it was generously filled, but it looked like the life had been squeezed out of it. Upon taking a bite, I was struck by two things: firstly, the bread had a rather strange and spongey texture; and secondly, while there was the odd burst from a piece of pickle or a jalapeno, the sandwich was severely lacking in flavour. 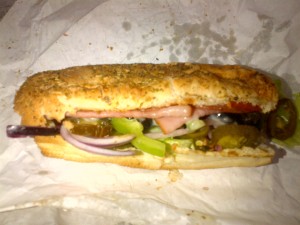 This was entirely unexpected, as there were enough items crammed in to surely ensure some palette pleasing. But once you’d torn through the spongey bread, crunched through fresh and plentiful salad, there was nothing much other than a vaguely non-specific savoury taste.

Gary described his sub in one beautifully distilled phrase: 516 calories of disappointment.

So, whilst some of our visits to the big chains have revealed a reasonable product (McDonald’s, Burger King), our visit to Subway, like our visit to KFC, indicated that they seem to be offering something that’s way below the standard you’d expect. I know from a modicum of first hand experience that Subway provides a good quick option when you’re out for an evening of drinking, and sustenance is urgently required.

But today’s visit was so entirely underwhelming that I couldn’t recommend anything other than jogging on past Subway, and visiting one of our considerably finer local sandwich shops, when lunchtime hunger strikes.