Having stopped for a pre-dinner drink with MJ at The Orchard, we arrived bang on time to be greeted by Susie and Tracey, our dining companions for the evening. Menus were already in place, including a list of daily specials, so we contemplated them as we caught up on pressing matters of state.

With wine of both house varieties ordered, I opted to start with grilled oysters and pigeon from the specials menu, then follow with seabass and mussels from the main a la carte.

Service is relaxed and friendly, fitting well with the style of the restaurant. Our charming waitress soon appeared with our starters. MJ and Susie opted for seared scallops which looked very good. My dish was of similarly high quality. The grilled oysters were a trifle heavy on the seaside saltiness, but the pigeon served to balance the dish beautifully.

My main course was the real star of the show. The mussels were huge and could lay solid claims to being the best mussels we’ve sampled on our quests. The fish was beautifully cooked, and the bed of green beans and boiled potatoes, on which things were served, rounded out an excellent dish with simple elegance.

The steaks for Tracey and Susie looked grand, and MJ was as delighted with her mussels as I was with mine.

So it’s fair to say that I was mightily impressed with the place. I’m not sure the artwork on the walls will be to everyone’s taste, but that aside Pierre Victoire, much like its sister bistro, Chez Jules, is a top notch place. I’d recommend you pay it a visit, at your earliest convenience.

MJ’s Verdict
When we were looking for something cheerful and central Blythe immediately mentioned Pierre Victoire, presumably because he knew of our friend’s (and my) love for Chez Jules. I met Blythe early at The Orchard around the corner for a drink, where they seemed to be churning out fine looking meals that made us add it to our list of places to visit.

We arrived at Pierre Victoire right on time and our friends were already there. We sat and ordered a bottle of red and white before having a look at their menus. Their menu had the general run of a fine looking French catalogue of classics, while their specials menu had some tantalising treats as well.

After a bit of catching up and discussions of ‘blanking’ people on the street you may or may not want to speak to, we ordered. I opted for the seared scallops and white asparagus. After a suitable wait, our starters arrived and look delicious, well, mine did anyway. I was too enthralled with the smells of seared scallops to do more than glance at Blythe’s oyster dish.

The scallops were perfectly cooked and the white asparagus added a bit of something, while a taste of lemon cut through and complimented the dish nicely. For texture’s sake, it might have benefited from something with a bit of bite in it to balance the smooth scallops. 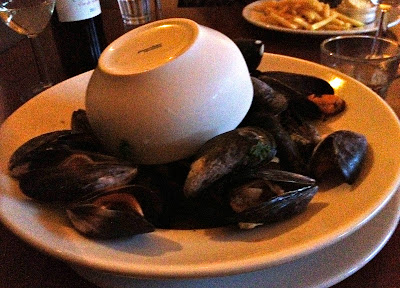 After a short, relaxed wait, where our conversation turned to the inevitable ‘exs’ category, our mains arrived and I am just going to say it:  I ordered damn well. I chose the mussels in white wine and let me tell you, I have never seen such large (and I mean MONSTROUSLY sized) mussels. The taste of the white wine and the tiniest hint of the sea came through with every bite and the green beans I ordered alongside had a peppery finish that was nicely washed down by a switch to red wine.

The espresso that followed was good, but nothing spectacular, but it didn’t matter, I’d return again and again to try various things on the menu… that is, if I can manage to not order the mussels each time.

We ate: mussels, steak and red pepper salad, soup of the day (if it had arrived, which it didn’t), vegetable cottage pie with homemade piccalilli