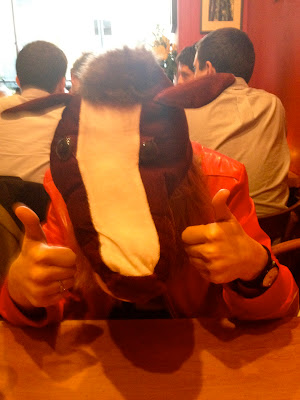 MJ’s Verdict
Last week I was surprised by someone thinking that I wouldn’t go somewhere like Bell’s Diner because it was too simple; of the two of us at Lunchquest, I am definitely the more fussy eater, but also the one that is more attached to the simple style diners and rustic cookery as opposed to the overly ornate Michelin starred styles. Don’t get me wrong, both can be good, but still this comment threw me off a bit.

Regardless, I happily tottered along in the sunshine to St Stephen’s street in Stockbridge, where on our overnight walk on Saturday, Blythe and I had wandered past and had a look at their menu. The place is tiny. The walls red. The waitress singular, and the menu short and sweet.

We met our friends Tracey and Susie, who graciously booked the table and were down for various reasons, but in my mind I like to tell myself that it was only to celebrate Blythe and my respective birthdays, which fall a few days apart. After the wonderful greetings, we sat at a lovely rustic table, in chairs that were as mismatched as the musical taste that filtered through the single room: Katy Perry, 80 hair metal, musical tracks, it was fabulously eclectic!

As for the food that Bell’s serves, you have a choice of a few starters, burgers in 3 sizes (and a chicken and veggie version, and your choice of with or without bun), and steaks all served with sides of chips and salads.

As ever, I couldn’t decide what I wanted, and ordered last. No one was any help since they couldn’t say that one thing was better than another when I hoped for some guidance in burger vs steak vs chicken decisions… I eventually opted for the small burger with mustard and no bun, and extra salad instead of fries. I also ordered a side of tomato salad for the table. We sat back and waited. And, when I say waited, I mean that I received a fabulously silly horse hat, spurtle, shewee and a gift certificate to Fopp! What a wonderful way to pass the time while waiting on our food.

Before long, a wheel of condiments was delivered to the table. There was ketchup, onion chutney, tomato salsa-y things that became progressively hotter (about 3 of them), corn salsa (which tasted interestingly like sweet chili sauce with corn in it), and a few others. Soon, our mains arrived. The first thing I did was remove the slab of mustard butter that was sitting on my burger. I have an aversion to butter on a burger (or on sandwiches for that matter, but that’s for another discussion) and didn’t really think that was what I would get with a mustard burger. I was surprised that they took it upon themselves in the kitchen to give me a HUGE salad on my plate to make up for the lacking chips (which I normally would have gotten and given away to the other diners, but they all had chips already, and a few extra sides of onion rings were floating about our table as well).

The burger was good. I like my meat pretty rare, even burgers, but I also have no problem with a well done burger when it is flavoursome like this one. I tried it plain, it was excellent; and then I tried it with various bits of the condiments from the wagon wheel before settling on mostly the oniony one while devouring all of my fresh and pretty salad. I dove into the tomato salad as well, but I think that the idea was better than the produce allowed it to be; it’s just that we live in Scotland…the tomatoes here just aren’t what they are in the warmer countries, but it was fresh and the basil, olives and good olive oil really brought the whole thing together.

We were all pretty stuffed full, so we opted to just have coffees, which were pretty good and really hit the spot. All in all, Bell’s Diner is a charming place that I look forward to returning to and giving their steaks a go. But as far as I’m concerned, there is no where else I would travel to, to get a burger in Edinburgh.

Blythe’s Verdict
It had been many a year since my last visit to Bell’s Diner, so when Tracey and Susie suggested it as the venue for a little celebratory dinner (this week holds birthday celebrations for both MJ and me), I was delighted and excited.

Condiment wheel from another angle

For the uninitiated, Bell’s Diner is a tiny wee place in Stockbridge with a tall reputation for fine burgers and steaks. It has been ploughing a very similar furrow for many years, becoming an established fixture. Booking is almost always required, as it’s very popular. On our visit, the place was as busy as ever.

The formula is simple: eat red meat. There are good inclusive options (indeed Tracey opted for the chicken burger, and MJ’s tomato salad looked very tasty), but this is essentially a carnivorous playground.

Service was cheery, helpful and prompt. The place is small, so managing the room isn’t overly complicated, but it’s still carried off with considerable elegance and charm. I thought our waitress was some kind of clairvoyant when she asked if we were celebrating a birthday. Reference to the birthday cards that covered the table probably meant that she was just averagely observant. My brain possibly wasn’t working in tip-top order, on this occasion.

As we pondered our choices, I was pretty clear that I was going to opt for the Roquefort burger. At the eleventh hour, I switched my allegiance to the Roquefort steak, and I’m rather glad I did, as what arrived, shortly thereafter, was a massive chunk of rump.

I’ve been having a little trouble with Edinburgh steak places, of late. We reviewed Kyloe, just after it opened, and while we were impressed with the ingredients, I can’t say we were overly impressed with how they’d been prepared. The new restaurant on Picardy Place, Steak, has made some real PR blunders in its first few months, so in my mind is best left alone for a wee while to bed-in. These places are seeking to fill a perceived gap in the market for a truly spectacular steakhouse in our fair city. I agree that the title of “best steak place” is currently vacant, but that’s only part of the story.

For me, there are a small number of restaurants in Edinburgh that serve good steak. Chez Jules is one; Bell’s Diner confirmed itself to be one, on this performance. I’ve heard praise for Le Mouton Noir and a few others. When it comes to “speciality” steak places, the difference in quality just isn’t pronounced enough, so negative perceptions emerge. Until someone comes along with an absolutely defining steakhouse experience, I think the steak places that don’t describe themselves as solely steak places are the places to opt for, as aside from any other consideration, the offer considerably better value.

My steak in Bell’s Diner was really good. It was bursting with flavour, beautifully prepared, and accompanied by generous servings of simple yet satisfying chips and greenery. The Roquefort topping was truly regal. The dish met my requirements for steaky goodness entirely.

So overall, I’d highly recommend Bell’s Diner. It has a simple and winning formula that I found entirely charming. The food is high on flavour, the portions are large, and the prices are very reasonable. The service is welcoming and the place has an entertainingly relaxed chic about it. I suggest you pick up the phone and make a booking, at your earliest convenient opportunity.