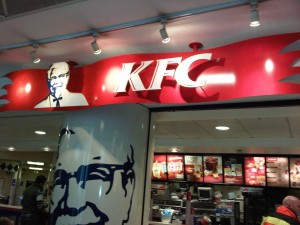 As part of our continuing cross-continental link-up with Lunch Quest: Hong Kong, we headed to Waverley Market (I mean Princes Mall, of course) to sample the delights of KFC, following LQ: HK’s trip there, a few weeks ago.

On our way, Gary and I got to try out the new Waverley Steps, proving conclusively that the escalators are incredibly slow and that regular steps are the way forward.

Once captured by the mall’s considerable hubbub, we reflected that choosing to visit this place during school half-term was probably not the finest decision we’d ever made, but we were there so decided to soldier on. We joined a short queue and considered our options from the vast array of signage, dotted between lovely pictures of “The Colonel”. Actually, we’d both made some initial investigations prior to arrival (Gary via the KFC iPhone App) and were pretty much sold on sampling the 1050 calorie “boneless banquet for one”, a selection that comprised three chicken mini fillets, popcorn chicken, fries, a side dish, and regular drink. 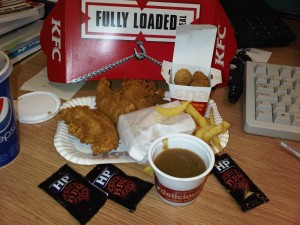 I was quickly attended to, by a friendly member of their counter staff. Eagle-eyed Gary spotted their customer service mantra, behind the counter: BLAST, which stands for Believe, Listen, Apologise, Satisfy, and Thank. It’s really a way to deal with customer complaints, but it was interesting to spot in such a prominent position for staff to regularly drink-in.

I have to say that the woman who served me did so extremely well. She quickly and clearly outlined my various options for drinks and side-dishes (I went for “popular cola drink” and gravy), was clear with me that my order would take four additional minutes to arrive, and dispatched me from the place with a cheery smile. 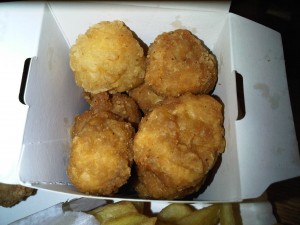 Sadly, this is where the quality began to ebb away. Once safely returned to my ivory basement, I contemplated my “box of delights”. Everything looked reasonable, but I can’t say it was the most appetizing array I’ve ever seen.

I started by dipping a few chips in the gravy. It was not bad. Unfortunately, the chips came in a range of cooked states, from crispy, to soggy, to decidedly undercooked.

The mini fillets, which were freshly cooked, were nice and crisp on the outside and moist in the middle, but were almost entirely tasteless. The only discernible flavour was that of the oil they were cooked in, which meant they just gave the overall sensation of “generic deep-fried savoury product”.

The little morsels of popcorn chicken were actively unpleasant. In Gary’s words, “those little gristly balls of grey were the foulest thing I have eaten for a long time”. I don’t think we need add anything further to that. 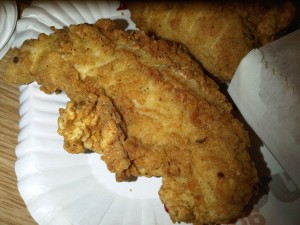 In a further expression of his general disgust at the quality of the food, Gary deleted the KFC App from his iPhone, but was still left “trying to delete the queasy feeling from my gut”.

So overall, KFC was not good. Their service was good, but it wasn’t backed up by food that you’d ever want to eat. With the other fast-food places that we’ve reviewed, it’s always been fairly easy to discern that certain dishes have a more-ish appeal, even if you know they’re not of the best quality or health enhancing value, but with KFC that was much more difficult to work out. Both Gary and I found items that would gladly be consigned to a food version of Room 101 (a cage of popcorn chicken strapped to my face – the horror, the horror!), so couldn’t in all good conscience do anything other than caution you against visiting their premises.

We ate: boneless banquet for one (x2)