Heavens to Murgatroyd, it was cold and windy, today! We gamely battled against the prevailing wind, in search of a new soup and sandwich experience at a little place I’d spotted on last week’s trip to Dusit.

Lime is a tiny little sandwich shop, specialising in freshly made sandwiches and smoothies. I’m still not 100% reconciled with the smoothie, despite the best efforts of Susan from Hula Juice Bar, but I’m sure I’ll get there, in time.

Today, my attention was firmly focussed on some soup and a sandwich. As we arrived, it was good to see a considerable queue. It proved very useful, as well, as there was a lot to take in on their very busy blackboard, behind the counter. On it are a panoply of sandwich filling options, which can be encased within baguettes, wraps or paninis.

They had me at “hello” as their first option sounded mighty tasty to me: a super veggie, comprising hummus, basil pesto, sun-blushed tomatoes, mozzarella, and rocket. I opted to have it all jammed in to a brown baguette.

From the choice of three soups (butternut squash & sweet potato, tomato & basil, and chicken broth), both Gary and I opted for the chicken broth.

Having been very pleasantly surprised to be charged on £3.49 for the privilege (this is one of their daily lunch special deals), we headed back in to the teeth of the gale, and were blown back towards to office.

Having been flash-chilled on the journey, I turned my attention firstly to the lovely warming bowl of soup. It wasn’t the prettiest looking broth I’d ever seen, but that’s often the way with hearty soup. I ran my spoon through it, and was pleased to located a good amount of shredded chicken, chunky leeks, and barley. The soup was just the kind of thing that my fellow Total Food Geek, Georgia, was looking for last weekend, so it’s a little unfortunate I didn’t visit Lime a few days earlier. 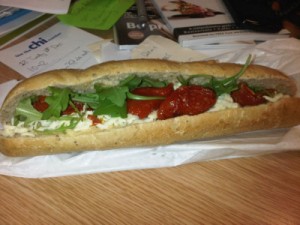 My baguette was extremely good. Again, the hummus and pesto worked surprisingly well together, as did the tomatoes and rocket, and together they blended into mouthfuls of Mediterranean goodness. The mozzarella was of the grated variety that’s usually applied to the top of pizzas. It was crammed in to the roll in extremely generous amounts. While it was bland, it provided a good layer of receptive savoury matter to pad out the punchy flavours of the other ingredients. 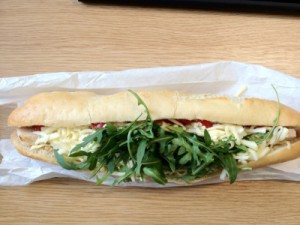 Gary ran in to the same issue, with his roll heavily crammed with the bland cheese. He’d matched the cheese with some slightly bland chicken, the overall effect of which was that his roll was incredibly filling (indeed he couldn’t finish it all), but wasn’t the most flavour-packed item.

Overall, I was well impressed with Lime. Their soup was good and their baguette was better than good. It seems a popular little place, but the service is super-quick, particularly considering that each sandwich is hand-made with a good attention to detail. I’d recommend you pop along, take advantage of their very reasonable lunch prices, and try one of their many flavour combinations.

We drank: nowt – the hot soup was thirst-quenching enough