Blythe’s Verdict
Café Marlayne has been a Thistle Street staple throughout the 2000s, attracting high praise from many of its customers. Around a year ago, they expanded their operation, opening a second outlet on Antigua Street, in much bigger premises than the intimate Thistle Street surroundings.

The first thing I noticed, once I’d taken in the full extent of the place, is that it’s very much a “two-in-one”. The front half is a café, offering a relaxed atmosphere and seating to match, while the back room is a bright bistro.

I was prompt, as MJ has conditioned me in to being, and had a moment to survey matters. Christmas had broken out, it being 1 December, with some nicely understated trimmings giving touches of festive cheer. The bistro room is a little strange. While it is simply appointed in white, with clusters of artwork on the walls, it has the feel of a back-room bistro that you might find attached to a village pub. It’s the kind of room that could turn its hand to many things, perhaps doubling as the place you’d hold local fundraisers, when the kitchen isn’t serving posh nosh. This sense of flexibility could be used as a strength, but I’m not sure things are quite optimal, as they stand.

The kitchen sort of pours out of the door, in a slightly curious fashion. Where I was seated I had a full view of everything that was going on, and I didn’t personally feel it added much to my enjoyment of things. 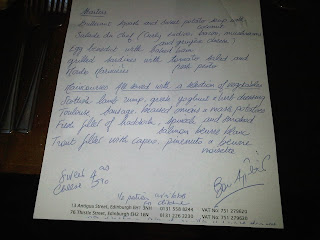 As I pondered, bread arrived, as did water, then some hand-written menus, and soon I was joined by my dining companion, Jane, who previously quested with us at Leith Lynx.

Both Jane and I agreed that the bread was tasty, as we contemplated our menu choices. Jane opted for the chef’s salad followed by trout, while I went for soup then lamb.

Our starters arrived promptly, as a large party of early Christmas revellers took up residence at big table, next to ours. 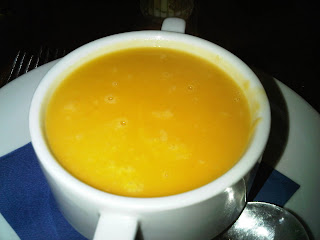 My soup, a blend of butternut squash, sweet potato and coconut was very good. It lacked an extra dimension to elevate it beyond that, but was a really well-judged marriage of flavours. I was very pleased with it. This was all looking very good.

Then we sat for an extremely long time before our main courses arrived. Of course, the attention of the staff was taken up by the patrons at the big table, but a good deal of the time, the staff seemed almost entirely absent, presumably tending to the needs of customers in the front café.

Over the coming Christmas madness, service is likely to be a little less than perfect in a lot of places, so I had some sympathy for the staff, as this was the first day of the advent season, and I’m sure they’ll iron out most the kinks, in the coming days. 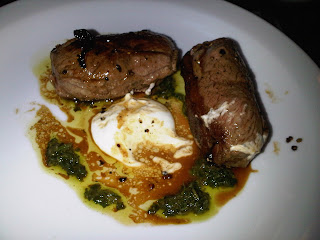 When the main courses arrived, they were excellent. I tasted a little of Jane’s trout, and it was lovely. My two chunky pieces of lamb were very soft and tender, deeply flavourful and extremely satisfying. For me, the dish could have used a bigger dollop of yoghurt, but that’s my inner honorary Istanbulian talking. The herb dressing was packed with flavour. A plate of vegetables, for us to share, were simply prepared and provided solid accompaniment. 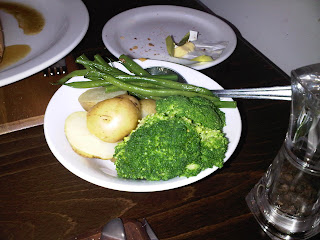 With service having taken a considerable length of time, Jane had to bolt back to work, as soon as she’d finished her trout, as she was constrained by the strict application of the “lunch hour”, while I had time to digest things, and finish with a little espresso. 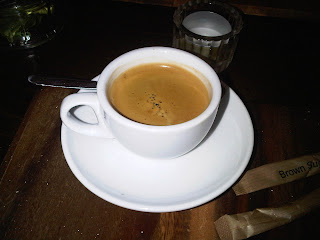 Overall, the quality of the food was excellent. My main course was one of the best I’ve eaten, of late. However, the service we received wasn’t good. I’m sure the start of the festive season explains this, at least in part, but the venue’s split configuration, and their choice to have staff managing service across both parts of the place, doesn’t lend itself to good service, as far as I could see. If you’re looking for a quick, business lunch, I don’t think this is the place for you – I’m not sure that’s a market they’re targeting, either. On a relaxed afternoon, with a nice glass of wine, I can think of nothing better than letting the world drift by while extremely tasty dishes sporadically appear, so when that’s what you have on your agenda, I’d recommend you pay Café Marlayne a visit.

Jane’s Verdict
I started with the salade du chef, which today comprised endives, mushroom, bacon and gruyere, with a drizzle of mustard. It was very tasty, with a perfect balance of salty smoky bacon with sweet mushroom and gruyere. Personally, I could have lived without the mustard, but that’s just me. 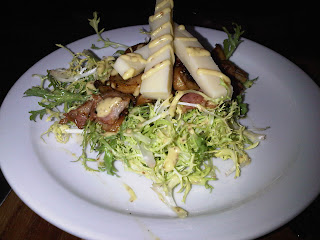 My fillet of trout with capers and pine nuts and a beurre noisette was perfectly cooked, with nicely crisped skin, but not too crispy, and again a nice balance of salty capers and sweeter pine nuts. There was a good contrast between softness and crunch. Yum! 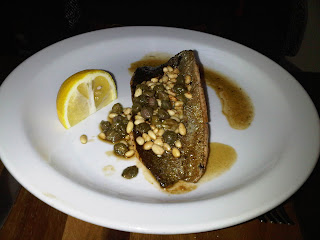 There was big gap between starter and main, so points off for service, but overall it was all very tasty.

Out of the Blue Drill Hall Cafe