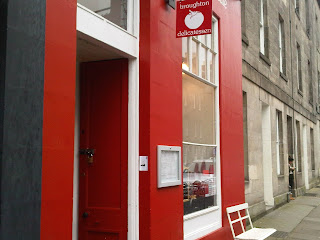 I do like the way that places are increasingly using Twitter to advertise their daily menus and specials. Hula do it; Union of Genius do it; and so do the lovely folks at the Broughton Deli.

In years gone by, Barony Street was a regular haunt, as friends of mine had a flat there, in the years directly following our academic studies. Many an enjoyable evening was spent playing poker, or supping on ghastly cocktails at the Baronial Mansion.

Anyhoo, to the matter at hand. I ambled down Broughton Street from office land and was soon in the deli’s bright confines. It seems to pull off the trick of being both simple and elegant, yet homely and with lots of characterful details. It looks like the kind of place you could happily wile away an afternoon, eating healthily and being thoroughly entertained by your surroundings.

On this occasion, I pursued the takeaway option. The soup of the day was spiced apple and turnip. 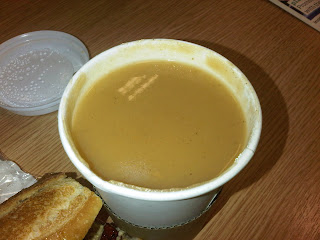 This was very reminiscent of the roast swede soup I’d tried when reviewing Signe Johansen’s book Scandilicious for Edinburgh Foody. It had lovely, warming spice and would have sat very nicely as a festive yuletide starter. For my palette, the apple pushed it in to the realms of being just too sweet, which was a shame, as it had excellent texture and had clearly been made with considerable care, and the idea behind it showed elegant flair.

The standard order included generous slices of bread and butter, but I was more in the mood for a filled roll, so I opted for a hummus, aubergine and sun-blushed tomato baguette. 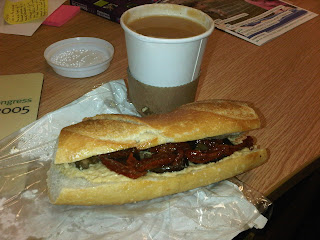 This proved to be a good choice, as the hummus was very tasty indeed. The baguette was crusty to the point of being a little challenging for my teeth, and it could have used some salad leaves to really round it out, but I was pleased with my choice.

Overall, I thought the Broughton Deli had a lot of charm, and you can’t fault it in terms of seeking to blend heartiness with elegance. It’s more the sort of place I’d prefer to sit-in for lunch, rather than regularly visit for takeaway, but I’d recommend you pay it a visit and soak in its undoubted delights.

Scores
Blythe scores The Broughton Deli:
4/5 for food
3/5 for presentation
3/5 for service
4/5 for setting
giving an overall 14/20

I drank: in the array of different dishes on offer

I wore: totally the wrong socks