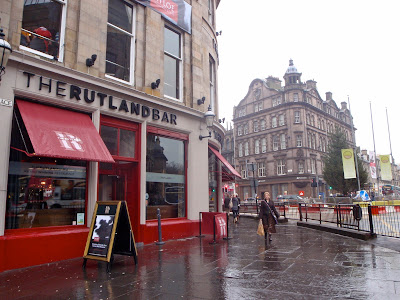 MJ’s Verdict
Today we went to try the newest steak restaurant in Edinburgh, and I tried to dress the part (you know, cowboy boots, arrow head around my neck… vintage plaid [yes plaid, not tartan in this case] shirt). The day was grey and wet and I was really looking forward to seeing what Edinburgh has to offer in the way of steak; I mean, this is more my sort of food: A hunk of rare meat, side dishes served in a nice restaurant with fabulous commanding views of Princes Street. 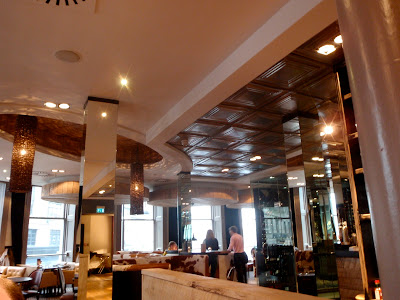 The bottom bar at the Rutland hasn’t altered. It is still chic and cool and I enjoyed a few minutes in the warmth of booth reading an Austen novel while I waited. When we were led upstairs I was both thrilled and a little skeptical at the alterations. Now, I have to admit a few things. I love cowhide. I would drape it over everything I own and wrap it around me in a toga if I could, and the new seats at Kyloe were antiqued leather and some with cowhide benches and backs (p.s. be warned that cowhide doesn’t wear well when it is the bottom part of a seat or booth, and getting food and wine out of it is a pain). I was a little in love with it. Gone were the dangly glass things and the shiny-ness of the whole place (with the exception of a few of the old decorations like the big black mirrors which clashed with the rest of the décor) and in its stead was an array of wood. I like wood. The wooden decorations and sideboards were reminiscent of the Roadhouses (various chains) in the States, which is where my next admission comes in. I’ve been taught to be a bit of a steak snob.
I think this comes from having had some of the best steaks all over the United States and living with a cattle exporter for well over a year…I learned a lot about the taste of cuts and where in the world (geographically) the best steaks come from. That being said, I should also say that my friend is a true connoisseur of beef, and the only steaks she would bother to buy, order, or cook while in the UK were from Scotland. So I knew that Kyloe had the goods.
B and I had already been told what to order, so I was prepared to forego my usual fillet and go with the steak board featuring 3 different cuts, but he thought it best to mix up our order and get different things. I was pleased with this arrangement; though I almost attacked B when he contemplated a sauce for his steak! Heaven forbid! If the steak is good enough it doesn’t need a sauce and I believe adding a sauce to a perfect steak would be a catastrophe. (needless to say, after I threatened his life, he didn’t order a sauce) B thought the menu was scarily big and varied for a steak place; I thought it was perfectly in keeping with a menu for a standard roadhouse or steakhouse, and was rather excited by the choice. I ordered the salmon with shallots, capers and bread to start, followed by the fillet (cooked rare). The starters menu was eclectic and I could have happily ordered many of the items, but I finally opted for the salmon because I had gone to the restaurant at the Rutland a while back and ordered it (it was stunning then) and wanted to see how it had changed.
When my food arrived, I wasn’t sure if I had envy of B. Sure, his was presented in an appealing fashion (I especially loved the wee quail yolk on the tartar), but the salmon I had was high quality. The thing I did find odd, though, was the way it was served. I guess I expected some sort of shallot, and caper dressing; what I got were slices of salmon, with a pile of raw shallots, and a pile of baby capers beside. But when mixed together with a bit of lemon juice on top, it worked. I’d not order it on a date, but it was a clean collection of flavours. The bread, however, was sad. I believe it was a mixed grain in white dough. A single slice was served and it was, well…dull. It had little flavour, but I ate it anyway because I wanted something to serve as a base for building my wee salmon, shallot, and caper pyramids.
The steak starter B got was good. The sauce under the pastrami wasn’t to my taste, but was well made (I’m not a fan of aniseed flavours). The other cuts were fine.
The mains arrived shortly after. My fillet had nice grill marks (which I can take or leave, but do add to the presentation), and was cooked accurately (I almost believe that there is no such thing as too rare) and it was so very, very tender! It cut gently like a good fillet should. The side of grilled tomatoes were delicious. Sweet and amazingly delicious. I wondered why they didn’t use such sweet and lovely tomatoes in my plum tomato, onion, and basil side salad? Those tomatoes were lacking something in ripeness and flavour. In fact, I added a bit of salt to pretty much everything—if you know me, you know how unlike me that is-it all needed a bit of oomph. B’s trio of steaks were good, but I refused his offer of beef dripping chips. 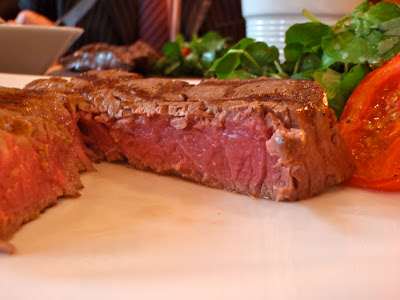 That’s what I can say about Kyloe: it’s good. My fillet was the best steak I’ve had in a restaurant in the UK, and I don’t think my cattle baroness friend would have been angry had I taken her to have lunch there, but they still seem to have some kinks to iron out.
The advice I’d give them at Kyloe is, that while I know they are trying to embrace the high-end of steak cookery, if they are going to go with the roadhouse look. Embrace it! go all out. Make the place rustic. Make it charming. Make it sell itself as a fully committed steak place, right now, it seems it might want to have a clientele that is somewhere between those of us who would kill to locate a UK version of a hole in the wall steak place in the heart of Texas, and those who feel that their designer shoes would be soiled by stepping through the mud to get to the steak shack.
P.S. the cow art, is fantastic. I particularly love the ear detail in Starry Night. Overall. Well done. I’d definitely recommend friends go there if they want a good piece of Scottish meat and have the money to spend on it.

Blythe’s Verdict
Kyloe is the new “Gourmet Steak Restaurant” housed within The Rutland Hotel. It has been the subject of much attention over the past few weeks, with eager diners making their way to its wood and cowhide covered confines, to take advantage of the attractive introductory discounts, and sample its dazzling array of meaty treats. For a good while, Edinburgh has been lacking a truly satisfying steakhouse experience, so no wonder Kyloe’s arrival has sparked this degree of interest, particularly given its stated commitment to showcasing local produce, as evidenced in their tempting menus. 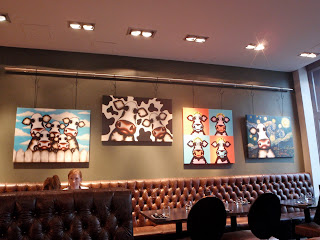 The ever-prompt MJ greeted me upon arrival, and we were immediately shown upstairs to the newly remodelled dining room. As I’ve said, wood and cowhide are the two things that dominate, with the leftover items from the previous incarnation of the place (particularly the mirrors) looking a little out of place. This will no doubt be sorted, in time.

We were shown to a nice booth-style table, and swiftly brought some sparkly water while we considered the extensive menu. Basically, you can order from a reasonably extensive selection of regular restaurant dishes, or turn your attention to the array of meat products on offer on the second page. I stuck firmly to the script set out in the reviews by Edinburgh Foody and Jemma Eat World, opting for the plate of beef, followed by the steak board.

The plate of beef offered four beef four different ways: carpaccio with horseradish crème fraiche; cured beef; pastrami with cornichons; and a little pile of steak tartare topped with the yolk of a quail’s egg. I got a nice detailed description from the waitress of all of this.

The dish looked very pretty indeed. It was positively dainty. It wasn’t abundantly clear whether to eat left to right, right to left or just to attack. With my usual subtlety, I attacked. I burst the yolk of my quail’s egg and attended to the steak tartare, first. Cutting in to the dish, I was a little perplexed to see beef, beef, and nothing but beef. My recollection of steak tartare, especially the excellent example I ate in Chez Jules, a few months ago, was that it was a mix of shallots, cornichons, capers, and mustard and beef, topped with an egg yolk. This was just beef with an egg yolk. 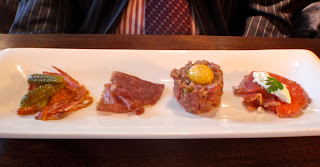 The carpaccio was good but the horseradish was whispering very quietly in the horseradish cream. The cured beef was fine. The pastrami and cornichons were good, but the sweet carrot dressing was not to my taste, at all.

I had a little taste of MJ’s smoked salmon. The salmon was good, but I didn’t get the thinking behind the piles of shallots and capers.

The mains arrived. Again, I’d ordered the interesting thing, so got the descriptions: a steak board with bavette; thick rib; and marinated feather blade. 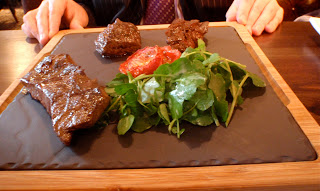 Again, as MJ was simply ordering the fillet, she got no such detailed description. This is just a small point, which they’ll iron-out, soon enough, but if you’re going to make this detailed description of dishes a feature of the service, it needs to be applied consistently to all dishes, even the straightforward ones.

The chips cooked in beef dripping, seemed to freak MJ out considerably, with their robust look. To me, they were fairly regulation chips of the chunky chip-shop variety. 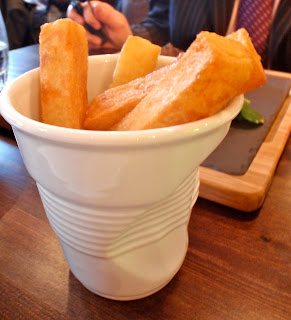 I must admit that I had expectations of Kyloe. One of them was that I was going to be able to write a bright and breezy review, highlighting the potential, pointing out the odd “new restaurant kinks” for them to iron-out, and end with a light recommendation for y’all to pop along a bask in this welcome new addition to Edinburgh’s restaurant scene, filling the gap in the market for a quality steak place that so clearly exists.

Unfortunately, I’ve ended up writing something much more muted, because while Kyloe has some really good qualities, at the moment it’s a flawed proposition. It definitely raises the bar for other places serving steak. It’s sourcing quality ingredients, seeking to showcase them in simple dishes, all presented in surroundings that in someway seek to mimic a steakhouse. However, it’s not there yet, and the bar it has raised still leaves plenty of room for other places to deliver the truly definitive Edinburgh steakhouse experience.
As it stands, Kyloe is good, but it’s priced to be very good, if not exceptional, and it has a little way to go before it reaches those levels.