Blythe’s Verdict
Karen’s Unicorn easily wins the award for the most amusingly named restaurant we’ve visited, so far. It has built up quite a reputation for offering high-quality Chinese dishes, since it opened in late 2009.

With MJ away in Istanbul, spending most of her time hopping between Europe and Asia, I was joined on today’s quest some of our wider network of questing pals. John, who first joined us at The Mulroy, dropped me a line a couple of weeks ago, suggesting that Karen’s Unicorn would be a good place for us to try. Tony, who had also joined at The Mulroy was happy to join. Completing the party was the profilic Jemma, of Jemma Eat World fame, who has been reviewing a veritable avalanche of places, over the past couple of months. I took up the mantle of promptness, arriving in good time to take an exterior shot, and then be shown to our table to await the arrival of my fellow diners. First to arrive was Tony, then John was hot on his heels. A combination of another branch of Karen’s Unicorn in St Stephen’s Street, and a slight over-reliance on Google Maps delayed Jemma a little while, but soon enough we were contemplating the business lunch menus.

The main restaurant room is very neatly styled in black and white, with just a hint of purple-pink. My tie and handkerchief combo fitted in extremely well. It retains all the fixtures of the New Town style, as you would expect, but these are given a sensitive, modern treatment. There was evidence of a little added festive glamour, but this was very understated and classy. 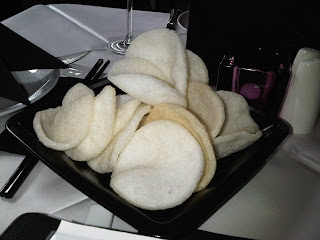 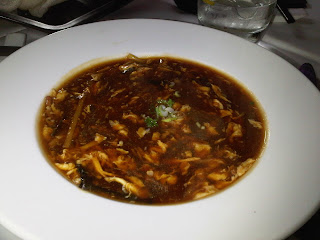 Dishes arrived quickly, and I have to say that I thought the soup looked considerably better fun than the prawns. It tasted incredibly good, as well. It was a richly meaty broth, full of shredded goodness, with the odd little prawn there for further textural variance. As hot and sours go, it was right up there with the best I’ve sampled. 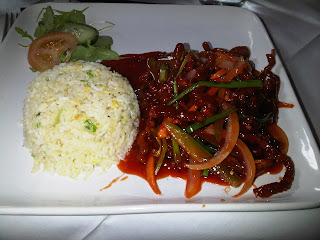 My main wasn’t quite up to those standards, but was still a hearty portion of crispy beef, served in a sweet and sticky sauce that had a nice amount of chilli punch. The fried rice was a good, simple accompaniment. Jemma’s lemon chicken looked very much like a fish supper covered in golden syrup (perhaps in tribute to St Andrew’s Day?!), but I dare say it tasted good. Tony’s chow mein looked a nice dish, as did John’s beef with black bean sauce.

As an express, business lunch it ticked all the boxes, very nicely. If you’re looking for something that will wow you, I’d advise an evening visit, when their more extensive menu swings in to action. The lunchtime service offers you well-executed Chinese classics, served quickly by the excellent staff, at a very reasonable price. The surroundings are extremely stylish, too. I’d heartily recommend you pay it a visit.

John’s Verdict
Having dined at Karen’s Unicorn on 3 occasions on very busy Saturday nights and been very impressed, I was keen to try their business lunch offering.

The decor in Karen’s is stylish and modern mostly black white and purple, which I find pleasing. The lunch menu while lacking any of the more exotic dishes available on the lengthy carte and the daily specials board was not short of choices.

On arrival our coats were taken and water and prawn crackers provided to keep us going while we made our choices and waited for Jemma, who had mistakenly gone to the other branch in St Stephen’s Street, which is closed on Tuesdays. 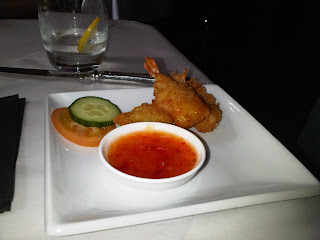 So, to the food. I ate crispy prawns with sweet chilli dip, followed by my favourite Chinese staple of beef in black bean sauce with fried rice. Both courses were very tasty and well presented, although if anything the black bean sauce was a touch under seasoned, which is quite a culinary feat. The service was efficient, attentive and unobtrusive. Extra marks for the steaming hot face cloths at the end of the meal, which are always welcome to bearded diners, especially.

Tony’s Verdict
After choosing my selection online from the a la carte menu, I had to rethink when presented with the lunch menu. Good value at £8.95 for 2 courses, but did not have any of my original selections. I will need to go back one evening to try those.

The lunch menu had 6 or 7 options for each course – varied enough to cover most tastes. I was warmly greeted and shown to our table where early bird Blythe was already seated.

At the table, water was already poured and prawn crackers and soy sauce in the centre of the table. Prawn crackers were light and non greasy.

I started with the hot and sour soup. It was certainly spicy enough for me. However, I thought it a bit gluey to get full marks. To follow, I decided to try something different from my normal chinese selections and went for a vegetable chow mein. This was a bit plain for my taste, but then the menu promised nothing else. It was pleasant enough but did wish I had gone for the shredded chilli beef. To finish off, I had filtered coffee.

I would like to go back and try the chef specials that are on the a la carte menu. It would be good to go in a group and share the selections

Jemma’s Verdict
I started with the prawns, which were really nice. I thought the batter was delicious, but perhaps that’s just me showing my Scottishness. They were lovely and sweet and the chilli sauce, although it looked like the ubiquitous Blue Dragon stuff, actually had a nice bit of a kick to it. Three prawns may have seemed a bit stingy, but for £2 odds you can’t really complain.

The main was basically a big lump of battered chicken covered in a sticky golden sauce. It wasn’t much presentation-wise, as it was a bit of a yellowy-beige monotone, and I echo Blythe’s sentiment that it looked like a fish supper. The chicken itself was tender and juicy, although it had a slight reconstituted look about it. The sauce, although yellow, had the same sort of flavour as the pink gloopy sauce you normally get with sweet and sour.

The fried rice was good and easy to pick up with my chopsticks.

For further thoughts on this, and to see all my other reviews, visit my blog, Jemma Eat World.