November 17, 2011 City Centre, local produce, Salad, Vegetarian 3 Comments
My review today comes from Henderson’s, perhaps the most legendary of Edinburgh veggie institutions, but I feel I must explain that my intentions had been a little different. Earlier I’d decided to head, with faithful lunch companion Phil, to The Allotment on Castle Street. However my hunt for veggie delights came to a very abrupt holt when we found our choice of venue had in fact closed down. Not a great start to my second review! In disbelief we did the thing that people do when they get to a shop that’s quite clearly shut, they still peer in expecting there to be some form of life. The notice cellotaped to the door confirmed our suspicions… 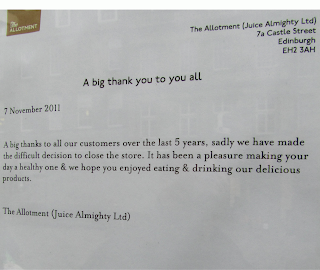 I have to say it wasn’t somewhere I visited a lot, but Phil was acquainted with the owner who’d first opened it as a juice bar a few years back. More recently the menu had been refreshed to include a range of healthy soups, wraps and superfood salads. Right in the heart of the city it bucked the trend of chain coffee shops and restaurants, offering an alternative for peckish shoppers and workers alike. We were both really saddened to see the place closed not just because we were hungry! But because we know how hard small independent businesses work to succeed. We fear The Allotment has succumbed under the weight of hefty council rates and regulations that are squeezing the life out of many streets in Edinburgh.

Anyway, we gathered ourselves and with a lunch quest still to do we set off instead for the mighty Henderson’s on Hanover Street. Now being a veggie, Henderson’s is somewhere I do frequent on a fairly regular basis (well the deli anyway). For those not acquainted, the Henderson’s fold includes the restaurant downstairs, the deli upstairs, the bistro round the corner on Thistle Street, and the latest addition @ St John’s (Church) in the West End. For almost half a century Henderson’s has been serving up a 100% vegetarian menu to the people of Edinburgh, and for this I must congratulate them! Phil was keen to sit in the restaurant so our review only extends thus far but I’m sure I’ll be back to write about the others. 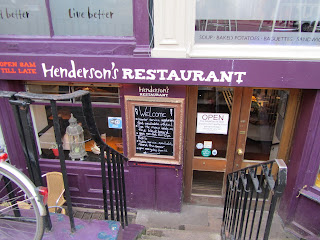 The original Henderson’s is at basement level and once you enter through the doors you are presented with a counter displaying an amazing array of colourful salads. I always find it hard going to a veggie restaurant as it takes me so long to pick – basically I want all the dishes! Whilst my brain whizzed Phil got straight in there ordering the focaccia pizza and selected a huge plate of three types of salad. The pressure was on now to decide, so what do you do when you’re holding up the queue?… you pick the first thing on the menu – spinach, tomato and brie quiche also with a salad. The service was super quick with all our dishes ready by the time we’d paid at the till. 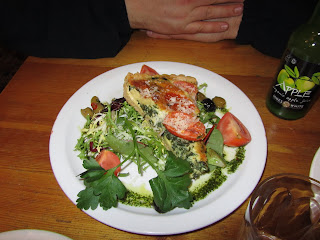 Once seated Phil remarked that it was a strange choice as generally I’m not a quiche fan, and he was right of course as it turned out that Phil loved the quiche and I was enjoying the focaccia pizza far more, so we did a bit of swapping. 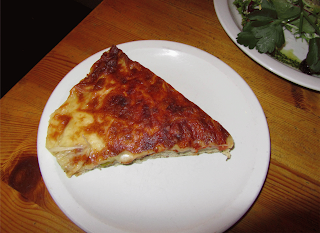 The salads were all superb and tasted full of quality ingredients. 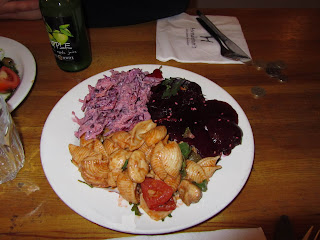 The simple beetroot salad made with sesame seeds was a clear winner (being part of a green-fingered family, I know a good beetroot when I taste it!) Over lunch Phil reminisced about coming to Henderson’s as a child with his Mum eager to ensure he ate healthily. It seems this place has lasted over the years delivering a consistently high standard of vegetarian food.

The plates of goodness were soon polished off and we sat back to take in the surroundings. Henderson’s was buzzing with the lunch time crowd but we couldn’t help thinking the owners might perhaps consider revisiting the décor. It felt a bit like the inside of an alpine lodge in need of a freshen up – but I can see it’s not the no.1 reason people come here.

Overall Henderson’s is a vegetarian delight in the centre of Edinburgh living and breathing the owner’s motto to ‘eat better, live better and strive to use local, seasonal produce’. It’s all about the food and quality of ingredients – you won’t find any nasties here! I would be confident to say that anyone who likes eating healthy food, veggie or not, would enjoy lunch at Henderson’s Restaurant – veggie visitors don’t miss it!