Well, we seem to have dived-off into an amusing little vignette, focussing on some “restaurants” that weren’t originally within our field of interest. It’s funny how life, and lunch, works out, sometimes.

Strangely enough, on the day when we read about The Mulroy’s regal launch, we decided to visit another jolly old royal, The Burger King 😉

In my younger and more vulnerable years, I used to pop in to see the Burger King relatively regularly, often after many a pint in Pivo. I vividly recall learning a veritable profanisaurus of Spanish swear words, from one of the regular, Friday night security guards. But those days have gone, that particular palace lies vacant, and the search for Whoppers these days takes you to less glamorous spots, like Waverley Station.

As with my trip to McDonald’s, where I’d not previously had a Large Mac, so with the Burger King, I’d never previously had a Whopper. I negotiated the interplay of questioning slightly less well, on this occasion, but still managed to convey my intention with reasonable efficacy. 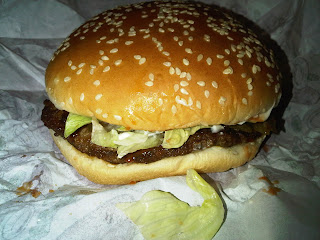 My dining colleague, Gary, opted for the Premium Angus meal. 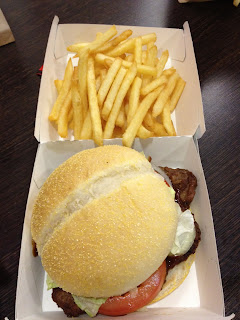 We both chose a popular cola drink, as an accompaniment. 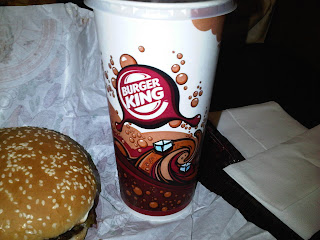 By fast food standards, we had quite a time to wait. Particularly given that this branch is located in a train station, and is presumably used to fevered commuters demanding instant meaty gratification, before boarding their clickety-clack of choice, I thought the service peculiarly sluggish.

When our meals arrived, and we had swapped them over so we had the right ones, we sat down to tuck in. If the standard of presentation for these type of places is how accurately the choice looks like its laminated photographs, then I think the Large Mac looked a little more like the photograph than the Whopper did. On the other hand, the Whopper looked a good deal more appetising though, and so it proved.

This was a burger as you might reasonably expect a burger to taste: meaty. It’s array of accompaniments, including gherkins, ketchup, tomato and lettuce, all added some element of flavour. The bun was still more foam pad than actual baked good, but I was pretty pleased with what I ate. 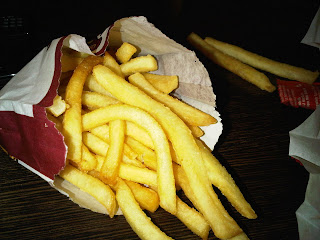 The fries were non-descript, and in somewhat scarcer supply than in McDonald’s but that could have been down to my ordering.

Overall, I enjoyed the Burger King’s food much more than McDonald’s but they don’t have the fast-food service working anywhere near as well, at least not in this particular branch. Our fast-food burger quest will roll on to Snax, next week. As always, we’d welcome suggestions for other places to consider. Any good burger vans lurking nearby, for example?