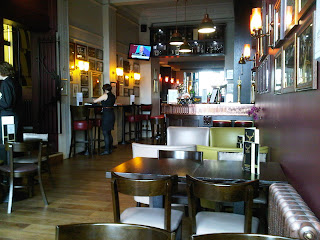 Today, I had a little administrative business to complete at the , as that’s the place we’ve chosen for our work Christmas Lunch. Given that I hadn’t eaten there previously, I thought it best to stay for lunch, once the deposit paying had been sorted.

The has a prime location atop The Mound, on North Bank Street. Extending across three shop fronts, next to the new branch of Porto & Fi, it combines bar, bistro and whisky shop, where ecclesiastical books and items were once sold. 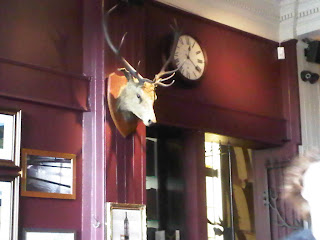 The staff are welcoming and incredibly friendly. I had my run of the place to begin with, as I was an early bird, but things soon picked up with a varied crowd of locals and tourists.

The lunch menu is simple and to the point: soup; sandwiches; or a small selection of light dishes, all very reasonably priced.

I opted for the sandwich and soup of the day combo, and awaited details of what was going to be combined with the ubiquitous celeriac, today. But no: cauliflower. Plain simple cauliflower. Not an almond, or parmesan foam in sight.

Now, I’ve told you a little about my culinary disasters with dessert, in the short series on my lemon tart agony. What I speak less of is the rare occasions when I bugger-up a soup. Today is confession day: I once massacred cauliflower soup to the point where half the pot was poured away! My error: adding an extra ingredient where simply more cauliflower was required. I learnt from the mistake, but it stands alone as a blight on my soup making record. 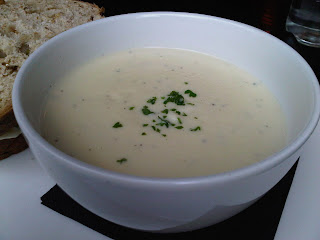 So, what was I going to find in today’s soupy offering? Two words: pure heaven! In her guest post, Frauke said that the leek & potato soup she had here was the best she’d eaten in a restaurant. I can only echo those sentiments. The soup was silky smooth, rich and creamy, and completely majestic.

My waiter approached to ask if everything was OK. Before he could get the words out, I said, “this soup is really good!” “That’s what we aim for, sir,” was his well-judged response. 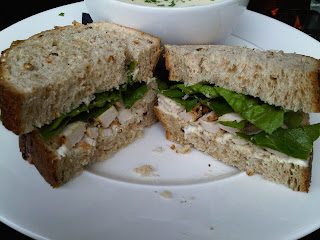 I’d taken a recommendation from my waiter and opted for the chicken caesar sandwich, which came on the side at the same time as the soup. It came on massive hunks of freshly made brown bread, crusty, seeded and wholesome. The chicken was chunky and moist. The dressing could have used a little additional piquancy, for my tastes, but it was a really good sandwich.

Both the soup and the sandwich got better with each mouthful. That’s a rare trick to pull off, and not one I’ve seen executed so well, for a long time. 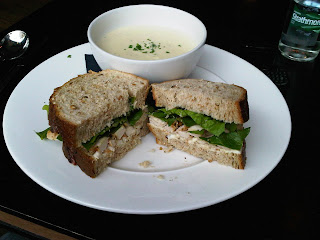 Overall, the Whiski Rooms is a tremendous addition to the Edinburgh lunchtime circuit. The assistant manager told me that they will be starting a new menu rotation from tomorrow. I hope it lives up to the high standards they’ve established for themselves. I’d recommend you head along soon, to sample their superbly superb soupy soup delights. I look forward to returning at Christmas!

He wore: trousers that could really do with a good iron